No doubt many of you have heard about the “Inverted Yield Curve.”  It came up a few months ago, and reared its head again on August 14, when the 10-year bond yield and the 2-year Treasury note yield inverted (two year paying more interest than the ten year).  In this blog, we will break down information about the yield curve, why it’s in the news, and what it could mean for the future.

Where does the yield curve come from? Treasury yield prices, like everything in the market, are based on supply and demand.  Originally, Treasury bonds are auctioned off by the Treasury Department, which sets a fixed face value and interest rate.  If there is a lot of demand, the bond will sell for more than face value, which lowers the effective yield (the government will only pay back the stated face value plus the interest rate).  If there is less demand, bidders will pay less than face value, which increases the effective yield.  As few bonds are held until maturity, they are then bought and sold on the secondary market, where market forces govern their yields.

A yield curve is a representation of the returns an investor can receive for bonds of different maturities with equal credit quality.  As US Treasury bonds carry the full backing of the US government, they are seen as safe investments (no credit risk because the Government will not go bankrupt).

Typically, in a healthy economy, bondholders are paid more – receive a higher “yield” – for purchasing longer-term bonds.  This is primarily due to the fact that longer-term bondholders take on more inflation risk because they are unable to access their capital for a longer time than short-term bondholders, and as such, demand higher compensation (there is a higher “opportunity cost” to a longer-term investment).   Such a yield curve would look like the blue line in the image below, which is from the beginning of 2018.

Now, what we’ve seen recently is the red line in the image below, from last week.  In this case, you can see that short-term bondholders are receiving a higher yield than many longer-term bondholders.  Specifically, the 2-year and 10-year yields are startlingly close, a phenomenon which has predicted every recession in the past 50 years. 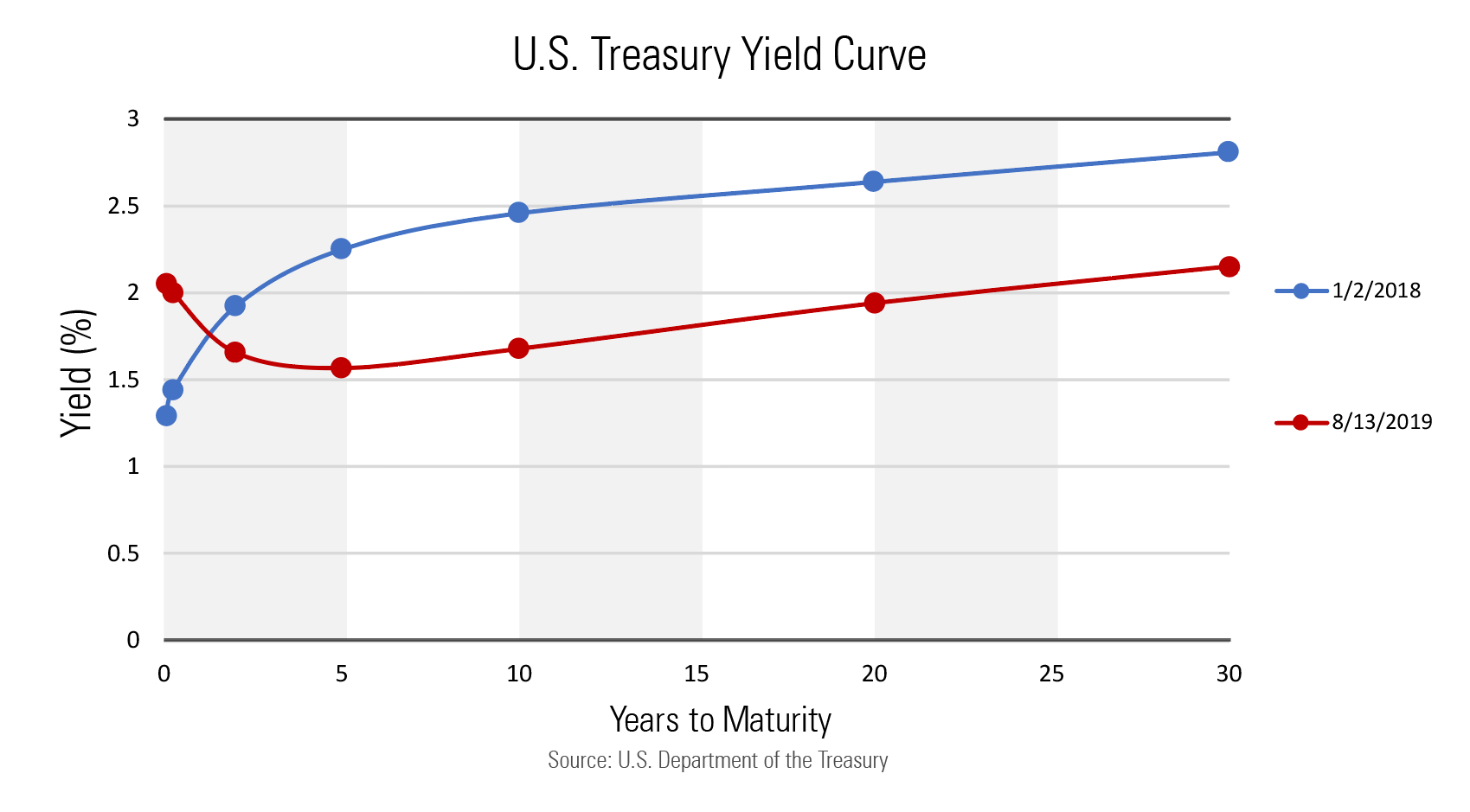 Why is the Yield Curve Inverted?

A number of factors can contribute to a yield curve inversion.  First, it could indicate that investors believe the stock market is too volatile, and they are looking for safer investments in bonds. In this scenario, investors believe that however small the return on bonds may be, it’s better than a possible loss in the stock market.  As the demand for bonds increases, the yield decreases.

Looking directly at the supply and demand of treasury notes, an inverted yield curve indicates investors have little confidence in the short-term economy.  The demand for longer-term bonds (in this case, 10-year notes) has increased, causing their yield to fall, while demand for shorter term bonds (2-year notes) has dropped, causing the yield to rise.  This signifies that investors are concerned about a possible near-term economic event that could cause financial risk or harm.   They would rather tie their money up in a long-term investment with a lower yield than buy a short-term investment with a higher yield, having to do something with that money after the short-term investment has matured.

An inverted yield curve also means that investors believe that inflation will remain low.  This is because, even if there is a recession, a low bond yield will be balanced by low inflation.

Still another interpretation of an inverted yield curve is that the market believes the Federal Reserve has left the benchmark short-term rate it controls too high, the market is slowing, and the Fed should cut interest rates.

Why Does an Inverted Yield Curve Predict Recession?

With investors piling into long-term bonds and avoiding short-term debt instruments, signs point to a lack of investor confidence in the short-term economy over the next few years.

Even before the yield curve inverted, it was relatively flat, which signals sluggish economic growth.

In the short run, markets run on psychology, not fundamentals.  This means that, if investors react too strongly to the inverted yield curve, it could become a self-fulfilling prophecy.  This could explain the 3% sell-off in the Dow Jones Industrial Average and the Nasdaq Composite, while the S&P 500 dropped 2.9% last week. To that point, the CEO of Bank of America recently said “We have nothing to fear about a recession right now except for the fear of recession.”

What Does This Mean for Me?

First of all, there’s no need to panic.  If the yield curve does, in fact, portend a recession, it’s still likely far away.   According to analysis by Credit Suisse, a recession follows an inverted yield curve by 22 months, on average, and stocks continue to do well for 18 months during that time.  Additionally, not all inversions have preceded recessions, so a recession is not a certainty. Furthermore, although many fools have said “This time is different,” well… it might be.  There are many distortionary factors that could be contributing to the current situation, chief among them are negative interest rates in Europe and the “unhealthy co-dependence between markets and the Fed,” both of which are driving investors into longer-term bonds, according to the chief economic advisor at Allianz.

You won’t see many direct effects from the yield curve inversion in your daily life.  The one benefit you could see is if you are planning to borrow money for a longer term, say for a mortgage.  This result of borrowing rates moving lower allows consumers to pay less interest over the life of the loan (if they have a fixed rate mortgage).  Lower borrowing costs mean more money in your pocket.

The biggest threat to your portfolio would be an actual recession, but as we noted earlier the inversion doesn’t guarantee a recession, it is simply one more indicator to consider.   Using the inversion alone to make major portfolio changes RIGHT NOW isn’t something we would recommend, but the predictive power of past inversions certainly has our attention.

Want to know more about yield curves, inversions, and how they affect your portfolio?

Reach out to us.