As we move into the last few weeks of the year, the stage is being set for what could be the classic case of an unstoppable force meeting an immovable object (the Fed and the market) as remarks from Jerome Powell about the state of inflation no longer being “transitory” has put the wheels in motion for a showdown that has been a long time in the making.

But, before we focus on the Main Event, it wouldn’t be 2021 if we did not provide a COVID update. It seems that each time we thought we were reaching the finish line for COVID events, another flares up and demands attention.  This time it is the Omicron Variant.  Initially, there were massive concerns that Omicron would be more serious than Delta: highly contagious, highly virulent, and able to avoid vaccine protection.  While it is still too early to make a definitive statement on the trajectory of Omicron, recent data has suggested that those initial fears may not come to fruition. Most have suggested that while Omicron spreads easily, it has mostly led to mild symptoms, and the current “boosted “vaccines are reasonably effective. This would be a welcome sign as the prospect of a new severe COVID wave is something that isn’t on anyone’s Christmas list, including the market’s.   As news of the Omicron Variant broke around Thanksgiving, market volatility spiked, and we experienced the first significant bout of selling since early September.  At the time of this writing most of those losses have been recovered. 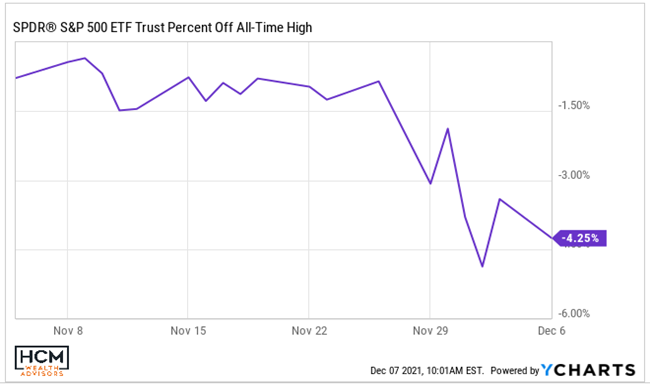 The chart above shows the extent of the recent selloff.  The line represents the percentage from all-time highs on the SPY(S&P 500 ETF).   The market was only down around 5% from all-time high levels while volatility levels, represented by the VIX, spiked to levels not seen since Feb 2021 and bond yields tumbled in a flight to safety trade.

So has the market already moved past the Omicron Variant and set up for a year end rally?  If you recall in our last Market Insight, we listed several reasons why the market could easily rally into year end.  Strong earnings and seasonality (December is historically the best month of the year for the market), combined with the mini-correction from Thanksgiving,  have certainly set the stage for the potential of stocks advancing through December). HCM remains positioned to take advantage of a “Santa Claus” rally.

But 2022 may hold something much different as the inflation battle between the Market and the Fed will take center stage.  While Omicron recently stole the headlines as the “reason” for traders to sell, it was likely the match as opposed to the gasoline.  What was lost in the Omicron headlines was recent  language from Fed Chair Jerome Powell stating that the inflation risk he has long described as “transitory” was possibly more permanent.  And while stocks can be a valuable inflation hedge, one needs to recall that the relationship between interest rates and the market over the past 15 years has been one of the most favorable in history.

With the admission by the Fed that inflation may be more permanent than they feel comfortable with, accelerated interest rate hikes may become the catalyst for market turbulence.  On the surface, the market reaction to this possibility may not have seemed that important…a 5% correction is not very significant. However, the market hasn’t had to deal with the possibility for higher rates in quite some time. The last time the Fed attempted to raise rates in December 2018 the increase was almost immediately walked back after the market had a 20% selloff.

Then, the Fed had much more wiggle room as inflation was not running very hot.  Today, market implied measures of inflation are almost 3 times higher, meaning if the Fed is serious about curbing inflation by hiking rates, they may need to ignore any dis-satisfaction from the markets.  The ideal situation for all would be a reduction in COVID related supply chain issues, followed by a subsequent easing of inflationary pressures that would allow the Fed to act under a more measured timeframe. Lower inflation levels could certainly go a long way to higher stock prices in 2022, but if inflation doesn’t subside over the next few months, the contest between the Market and the Fed may well  become the Main Event.

“Sometimes you will never know the value of a moment until it becomes a memory.”

If you have questions about the recent market activity, please contact a member of HCM’s Wealth Advisory Team: