On Friday, the Federal Government released the U.S. employment numbers for May, which threw economists and Wall Street quite a curveball with what may be the biggest forecasting mistake ever!  It showcases the difficulties in acquiring consistent and high-quality data during a crisis.

The consensus before the numbers came out on Friday were for job losses in the 8 to 9 million range.   The most optimistic projection was for a decline of 800,000 jobs. The actual number was an increase of 2.5 million. The consensus on net jobs created was off by 10+ million, and the unemployment rate was off by six percentage points.

Markets rallied on the news as the administration took a victory lap based on the report which was offered as proof that we are on a “rocket ship” recovery.

For some context of May’s numbers, please look at the chart below.  The economy had been on a steadily increasing slope, in terms of jobs added, since October of 2010, all the way up to February of 2020.  Then, when Covid-19 hit and quarantine orders were put in place, the numbers started to fall.  First gradually, by 1.37 million jobs in March, then quickly, by almost 21 million jobs lost in April. 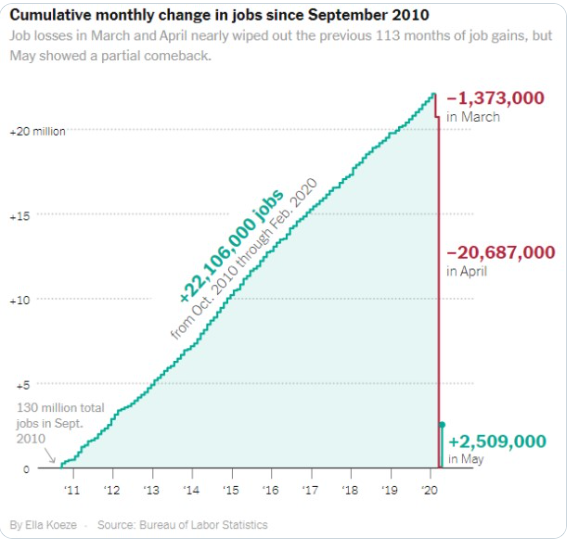 The 2.5 million jobs gained in May is certainly a good start, but still a relatively small number compared to the jobs lost in the previous month.  In addition, there was a significant discrepancy in the unemployment numbers themselves.  Correcting for this error adds 3 percentage points to the unemployment rate, taking it from 13.3% to 16.3%.

Although May’s job gains represent a positive change, it is important to note that there’s still a long way to go to make up for the losses suffered in the economy.  The 2.5 million jobs created in May are a drop in the bucket compared to the 20.5 million lost in April.  And experts believe that many of the jobs lost will never come back.

Also, as the nation grapples with unrest across the country reacting to the tragic death of George Floyd, Friday’s numbers showed a disappointing trend for the racial unemployment gap.  According to the Bureau of Labor Statistics, those classified as white Americans saw their unemployment rate fall by more than a full percentage point (from 14.7% to 13.3%), while those classified as black Americans saw their unemployment rate increase from 16.7% to 16.8%.  Not only that, but black Americans lost jobs at a faster clip in April than white Americans did.  Per Mohamed El-Erian:

Reactions to the report were cautiously optimistic,  glad to see the unemployment numbers trending in a positive direction but conscious of the fact that there’s still a long way to go.  “Okay, so nonfarm employment shows payrolls starting to recover—up 2.5 million in May—but payrolls are still down by nearly 20 million since February. We remain in a very, very deep hole,” said Betsey Stevenson, professor of public policy and economics at the University of Michigan and former chief economist at the Labor Department.  “This report needs to be put in context—the economy is still in a deep recession.”

There’s a worry among some experts that the recent good news will be interpreted by decision makers as a sign that the crisis is behind us, and that we can go about business as usual.   The country’s unemployment rate is still well above the peak rate of the Great Recession (10%), and one in five Americans is currently unemployed or underemployed.

Much non-partisan work is needed from our policy makers to bring us back from the COVID-19 financial brink, so that we are not dependent on government support to keep our economy afloat.