From an investing standpoint, we’re in uncharted waters, right?  The two-month downturn, February and March, was certainly severe.  But an article authored by Paul Kaplan of Morningstar shows that bear markets come in all shapes and sizes, and they are not actually that unusual.  And, when they occur and how you react can determine if your retirement income plans will stay on track or not. 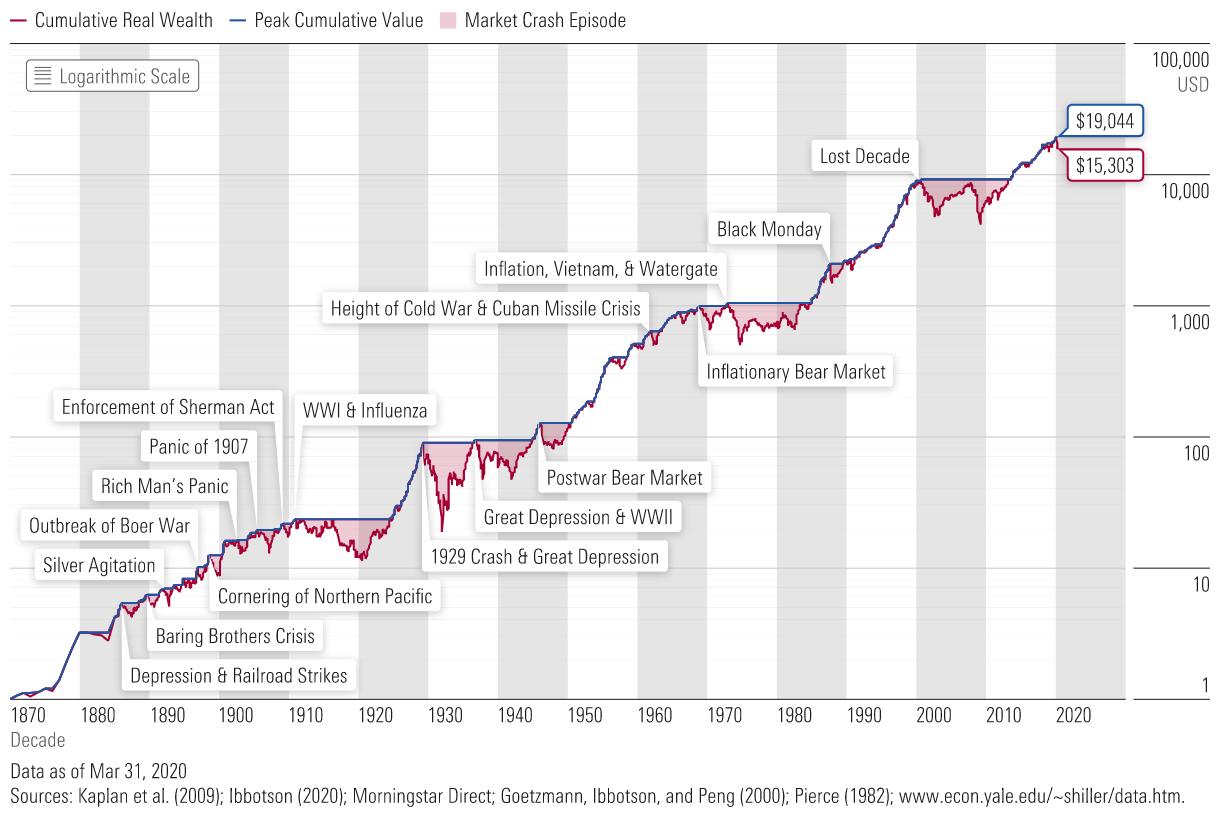 The chart here goes back 150 years, and shows 17 bear markets, ranging in severity from the 1929 crash through the Great Depression to the relatively quick downturn during the Cuban Missile Crisis in 1962.  Over that long time period, bear markets (defined as a 20% decline in the major indices) occurred roughly every nine years.  Each time, the markets eventually recovered to achieve new highs, but some—as you can see—took much longer than others.  This is why HCM utilizes both tactical management, the HCM Safety Net™, and a disciplined bond ladder process to help safeguard our clients’ income needs during difficult markets.

For examples of duration and severity, an investor holding equities at the beginning of the bear market beginning in August of 1929 would have experienced a 79% decline in the value of his holdings, and wouldn’t have gotten back to even until November of 1936—seven years later.  The next bear market started the following February and saw an additional 49.93% decline. This was obviously an extremely painful time to be invested, and a very scary time for retirees living off their investments.

In contrast, the Black Monday crash starting in August of 1987 saw a downturn of 30.21%—pretty scary too, until you consider that an investor would have been made whole less than two years later, in July 1989.  The downturn associated with the Cuban Missile crisis was more of a cub; investors experienced a mere 22.80% decline and were whole again a year and a half later.

These examples are not meant to minimize the pain that investors are experiencing during the present downturn or extrapolate how long it will take to get back to previous highs.  They do, however, demonstrate how unpredictable bear markets can be in both severity and duration and the risks they impose on retirees who do not properly plan for and manage the financial risks associated with these events.

Everyone wants a secure, happy retirement. To get there isn’t complicated, but that’s not to say it’s easy by any means.  It takes a disciplined approach to planning, saving, spending and managing market risk.  At HCM Wealth Advisors, we’ve been helping people retire for decades, and we can do the same for you.  Read over our Wealth Enhancement services to get a better sense of what we offer and how we can help you retire with more confidence.  If you have any questions, don’t hesitate to reach out.

Set up a call today!