For months now, the discussion around the possibility of the Fed beginning to taper its long running asset purchase program has taken many forms.  Some believing it was imminent while others remained steadfast that it would never happen as advertised.  Nonetheless, before the Delta Variant gained significant traction, many saw the Jackson Hole meeting as the perfect forum to allow Chairman Powell to lay the groundwork for the taper and possibly give additional guidance on raising rates.  Fool me once, shame on you…fool me for the last 13 years, shame on me.

The last sentence may be a little extreme, but it illustrates life in the “new normal” of today’s market environment.  One which seems to only be bound by the laws of central banks and their willingness to NOT do anything to upset the current paradigm of low rates and seemingly unlimited liquidity.  The Fed has been somewhat consistent in its messaging that it doesn’t want to begin to tighten policy until the Governors and Reserve Bank Presidents are confident that the economy has entered a sustainable phase of growth.  The issue is that the definition of “sustainable phase of growth” has taken so many different meanings, one gets the sense that maybe that isn’t what they are really concerned about. 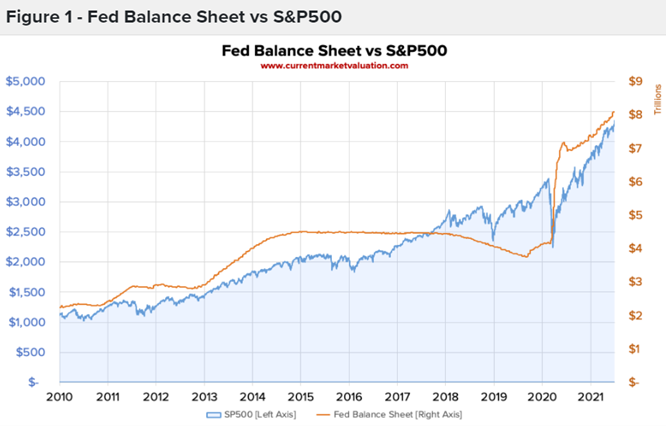 The chart above shows the level of the S&P 500 in blue(left axis) compared to the Fed Balance Sheet in orange(right axis).  One could easily make the argument that one of the biggest drivers, perhaps THE biggest, of market returns since the Great Financial Crisis has been the Fed’s willingness to keep their policy so accommodative for so long. The only real attempt by the Fed to taper in the past decade resulted in a 20% selloff and an eventual reversal of interest rate policy.

Now that Jackson Hole has come and gone without the Fed announcing any formal tapering plans, the new timelines are already being projected.  Will it be September? October? Maybe 2022?  While the guessing game continues, the market remains satisfied that the Fed is firmly in its corner…and therein lies the largest problem facing investors today.

To be fair, many investors don’t see this situation as a problem.  In fact, many see this as the exact opposite as returns have been stellar since the market bottomed during the onset of COVID-19 in March 2020.  Along the way, we have seen economic growth rebound   during the initial stages of vaccine rollouts and corporate earnings have recovered as the world learns to function alongside COVID-19.  But those positives have also exacerbated existing negatives, mainly historically high market valuations and a new wave of risk taking that can’t be sustained forever.

Why is the Taper Decision so Important?

It is as much about market psychology as actual market dynamics.  First, you have to remember what happened at the March 2020 bottom.  The Fed stepped in and went above and beyond anything it had done in the past.  This was a moment for all investors to take a step back and consider whether or not we have truly reached a new paradigm, where central banks suspend reality in order to allow economics and earnings to heal without walking through the fire of recession and bear markets.

The decision to taper will not only challenge the current market paradigm of low rates and ample liquidity, it will also test the market psychology that investors have grown accustomed to over the last 13 years.   Now that investors have seen what central banks are capable of, that high water mark may become the new expectation.   Investors have seen what the Fed is capable of doing.  If they believe that any and all problems can/should be solved by central banks…even ones that may be created by things like trying to taper, then a new “taper tantrum” may be in the cards.

With the countdown to the start of the taper being pushed into the future, most investors have resigned themselves to the reality that the Fed WILL begin to taper.  The bigger question is: what happens after that?  Markets seem content to worry about this issue at a later date.  Indexes continue to make new all-time highs while having now  gone nearly 200 days without a 5% correction. (The average time between 5% corrections since 1950 is only 97 days.)  And while we still believe equities can move higher into year end, the probability of increased volatility going forward has certainty moved higher.  When the taper does finally take place, it will give the Fed another chance to show it can do no wrong.  It will most certainly be one of their toughest challenges yet.

“A year form now you may wish you had started today.”   Karen Lamb