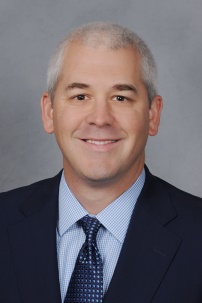 When Bad is Good!

So far, earnings are showing the first quarterly declines in years while the markets have quietly broken out to new all-time highs.   How can bad news bring good markets?  For one, volatility has settled down to levels last seen during the summer of 2018 and secondly, the news has not been filled with market-moving headlines.  Many investors welcome this as a time to relax while some pundits preach “the end is nigh”.  Regardless of one’s view of what is likely to happen next, corporate earnings are the next market moving catalyst on the radar.  So far, earnings season has been right in line with what most analysts were expecting.  As of April 26th, 46% of companies in the S&P 500 have reported for the current quarter.  Of those, 77% have reported a positive earnings surprise while 59% have reported a positive revenue surprise.  The blended earnings growth rate is a -2.3% which, if it remains, would mark the first year-over-year decline since Q2 2016.  On an absolute basis, these numbers aren’t the type one would expect to drive markets to new all-time highs, but on a relative basis they are better than lowered expectations. 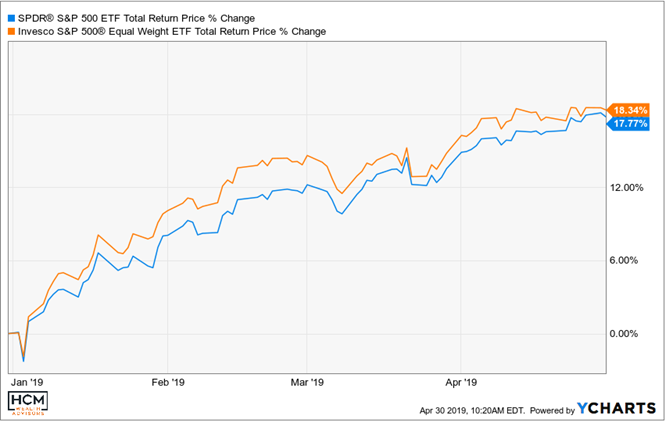 The chart above shows the year-to-date performance for SPDR S&P 500 ETF(SPY) in blue and the Invesco S&P 500 Equal Weight ETF(RSP) in orange.  The main difference between these two portfolios is how they are constructed.  SPY tracks the S&P 500 index and has a capitalization weighted allocation, meaning the largest companies (think Microsoft, Apple, Amazon, etc) represent the biggest share of the portfolio.  RSP takes a different approach by giving all 500 stocks in the S&P 500 an equal-weighting.  When we see the return of RSP exceeding that of SPY, it tells us that the broader market is doing better that the largest companies.  That market breadth is a positive sign.

This market is unique in that it has something for both the bull and the bear.  Most would view a negative earnings growth rate as a bearish signal. We would have a hard time arguing against that point.  On the flip side, the chart above shows that so far this year, the breadth of returns has been widely distributed, which can only be viewed as a bullish signal.  Markets that rely on just a few large stocks to support the entire index have an increased chance of collapse.  And, with interest rates still nil around the globe, supported by friendly central banks, the potential for additional multiple expansion is very real.  If we were to enter a “melt-up” stage, multiples could move substantially higher.

Our current objective is to maintain a neutral policy stance while waiting to see which way the markets break out.

As earnings continue to roll in, we may see a change in the data that could cause the market to establish a new direction.  Without a definitive move, we expect to see a continuation of the “Goldilocks” scenario, not too hot and not too cold, just enough to keep things the way they are.  In that case our neutral positioning should be just about right.  Even if things do stay calm, HCM will continue to monitor our internal risk and trend indicators.

-Markets expect little policy change from the Fed’s meeting this week, though Chairman Powell’s comments on inflation during the press conference will be of great interest given the recent shortfalls in core inflation data.