On Thursday, March 26th, we got our first glimpse into how the COVID-19 outbreak was starting to affect the economy.  There had been anecdotal evidence of industries having to shutter and business demand slowing, but this was the first meaningful reading and would either confirm or deny the fears that had been building for weeks.   Mainly, how bad is it going to be and how will the market react?  The Wall St. consensus was for around 700k new unemployment claims, which would have been the highest reading since the beginning of the data set in 1967.  One research firm predicted claims could reach 2.5 million, which seemed outrageous to most.  When the number was released: 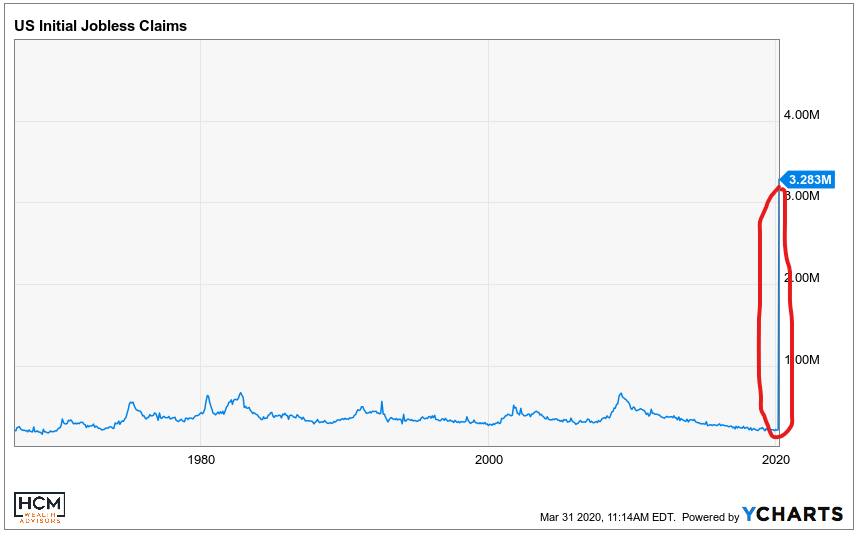 The claim number came in at 3.28 million, which was approximately 5 times higher than the previous record set during the 2008 crisis.   The vertical spike is circled in red because it is almost impossible to see on the chart.  I also wanted to provide a visual of how high this reading was against previous reports.  But a strange thing happened after the number hit the tape….the market began to go up on the news and eventually ended the day finishing 6.5% higher.  It was a move that defied all logic, assuming that recession-level economic data isn’t a positive for stocks.  Some began to use my least favorite term in finance to describe the move.  The data was “priced in”.  “Priced in” implies the market already expected the bad data so because it was “less” bad than feared, it became a point of optimism.  The problem with this theory is that not one analyst predicted a number even close to the actual reading and for such a large swing in the market, one would assume the market was expecting upwards of 10 million new claims.

Since the initial claims number was released, other economic readings have come in with recession-level indications as well.  However, the market has completely ignored all of this and has continued a strong rally that began last week.  This has naturally led investors to ask the all-important question: have we seen the bottom?  While the answer to that question is impossible to know in the present, it is certainly necessary to assess where we are.

Most economists are expecting the US economy will enter recession.  Some have even forecasted a reduction in GDP growth and unemployment that would correspond to depression levels.  These conditions, whether recession or depression, will lead to a reduction in corporate earnings.  It is this reduction in earnings that ultimately leads to stock prices moving lower.  While we have already experienced a significant re-pricing in equities, we still have no idea how this will ultimately play out.  Most companies have pulled guidance for the entire year because they too have no idea what to tell shareholders.  Even if the economic data is just “really bad” instead of “disastrous”, we still don’t currently see an economic picture that would support a return to normal for stocks.  Almost a third of the world remains effectively closed.

So how can the economic outlook be so dire while stocks are rallying?  There are two logical culprits. First, the amount of stimulus being injected into the system right now is truly unprecedented.  For the past 11 years, the Fed has embarked on a campaign to keep interest rates low and provide liquidity to the markets. At the same time, they have been providing psychological support to investors that if things get bad, they will do something.  Certainly, announcing an unlimited buying program that injects around $75 billion a DAY into the system is “doing something.”  While the long run consequences of such behavior can be argued, it’s fair to say no one seems to worry about such things at a time like this.   Second, there has been about $750 billion rebalanced into equities at the end of the quarter, creating a bid for equities.  That process is now essentially finished.

While the Fed and other central banks have been successful in calming the market rout so far, the next few months will put them to the ultimate test.  In the face of what will likely be some of the worst economic data points investors have ever seen, the question is: will the Fed be able to provide enough liquidity and assurances to essentially suspend economic reality?   The counter rally over the past 7 days is a start, but we will need to see more before we believe the worst is over.   During the 2000-2002 bear market there were a total of 3 separate 20% rallies and during the Great Financial Crisis there were two.  All of them ultimately failed and new lows were made.

If stocks continue to rally with no corresponding improvement in either containment of the COVID-19 outbreak and/or improvement in economic readings, we will likely use that opportunity to sell into strength and rebalance positions in our Advance and DefendTM models.

As long as the containment of the virus remains elusive in the US, uncertainty will remain the only certainty.

“There are no atheists in a foxhole and no capitalists in a market crisis.”

-Markets rallied on the back of dual stimulus by the Fed and Government.  The total of both programs will come in at around $6.5 trillion

-Initial jobless claims recorded a record 3.3 million, well above the consensus of around 700k.

-More economic readings will give further clarity on the state of the US economy, the most notable ISM Manufacturing, Nonfarm Payrolls and Factory Orders.