What Can a Tragedy Teach Us?

By now, most of you have heard about the horrific fire that took place at Notre Dame Cathedral in Paris, France.  Notre Dame de Paris was started in 1160 and was largely complete by 1260, where it has remained a key Parisian landmark for the past 750 years.  Miraculously, a large portion of the church was spared in the fire along with many famous Catholic relics.  What could have been a complete disaster quickly morphed into a sense of relief for some.  While it will still take significant time and resources to restore Notre Dame to its former glory, it’s fair to say things could have been much worse.

This tragedy can teach us a useful lesson about how perceptions shift as our emotional reactions are tempered by reality and how that shift allows us to view outcomes differently.  If someone told you Monday morning that by the end of the day, most of Notre Dame’s roof and spire would be destroyed in a blazing fire, you most likely would have considered that outcome to be tragic, with no silver lining.   But think about how the event has unfolded.  Expectations for the ultimate outcome most likely fluctuated between being horrified that the ENTIRE cathedral would burn down to feeling some inclination of relief around the fact that the worst-case scenario was avoided.  The ultimate outcome was the same, but the journey was defined by our emotional reaction to fear about how bad the outcome could be. In addition, the 24/7, instantaneous news cycle helps stoke those fears to keep you “tuned in.” The same thing is about to play out in the world of corporate finance with first quarter earning releases. 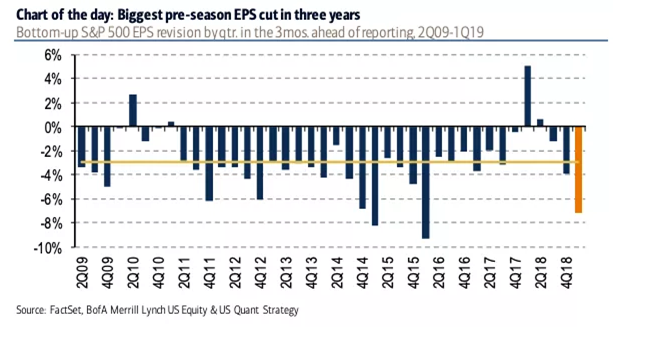 The chart above shows analysts revisions to corporate earnings, with the starting reference point being 3 months before the actual reporting date, so the bars represent the difference between the initial expectation 3 months ago versus where it is now.  As we can see, the revisions for this quarters earnings have been decidely negative.  In fact, this is the 3rd largest cut in a decade and the largest cut in the past three years.  Its fair to say that investors aren’t expecting very good results from the upcoming earnings season.

Wall Street loves to play the expectations game, especially with corporate earnings.  Almost every quarter, they begin with very optimistic numbers, then slowly begin to revise them lower and lower, until finally they have reached a more pessimistic level.  This allows companies to report numbers against lowered expectations and investors celebrate as companies “beat” their estimates.  These “beats” drive optimism back up and prices begin to move higher and the process starts anew the following quarter.  This is one reason bull markets are more fun than bear markets.

After 6 years of double-digit earnings growth, Q1 2019 is expected to have a negative growth rate.  From a fundamental standpoint, negative earnings growth should not get investors or analysts excited.  Earnings growth is the engine that drives stock prices higher as you are willing to pay a premium for the opportunity to capture increased profits at some point in the future.  If that future is too far away, some investors may choose to look for other opportunities.  In other words, they might sell.

But as we learned from the Notre Dame fire, the journey can shape our view of the outcome.  These negative growth expectations have been baked in for several months now, with some focused more on the future guidance provided by companies than on the actual numbers.  Put bluntly, the bar for what is considered an “earnings beat” has basically been put on the floor.  The initial shock of seeing a quarter with negative earnings growth as the “worst case scenario” has already been accepted.

As companies start reporting, any indication that things aren’t as bad as “previously advertised” could be a catalyst to drive equity prices higher as investors begin to feel a sense of relief, even though in actuality conditions aren’t ideal.  Investors will be paying close attention to guidance and looking for clues that this negative quarter may be an isolated event with the potential to shift back into higher growth in the quarters ahead.  The same way that citizens around the globe felt a sense of relief when they learned that Notre Dame de Paris can be restored, investors will be looking for signs that corporate earnings can follow a similar path.

“It is better to fail in originality than to succeed in imitation.”