For as calm and orderly as the markets were in 2021, they have been the complete opposite so far in 2022. After going almost 400 consecutive days without a 10% correction, the S&P 500 saw a 10% decline level off early last week. Things have been even more volatile for some of the lower-quality segments of the market, particularly in the growth space. The Goldman Sachs Non-Profitable Tech Index, which tracks a basket of high-growth stocks that have negative reportable earnings, has seen more than a 40% decline over the past 3 months alone. While this type of action conjures up memories of the 1999-2000 Tech Bubble, a strong counter rally that started late last week has investors asking whether this is simply a normal correction in a longer bull market or the beginning of something more ominous.

Ten percent declines are normal in markets, and they happen more than investors think. According to the website A Wealth of Common Sense, the S&P 500 has experienced an average drawdown of 13.6% over the course of a calendar year since 1950.  Bear market years see much larger declines while other years may see very little turbulence. The good news is most corrections simply create the opportunity for the next move higher in the market. 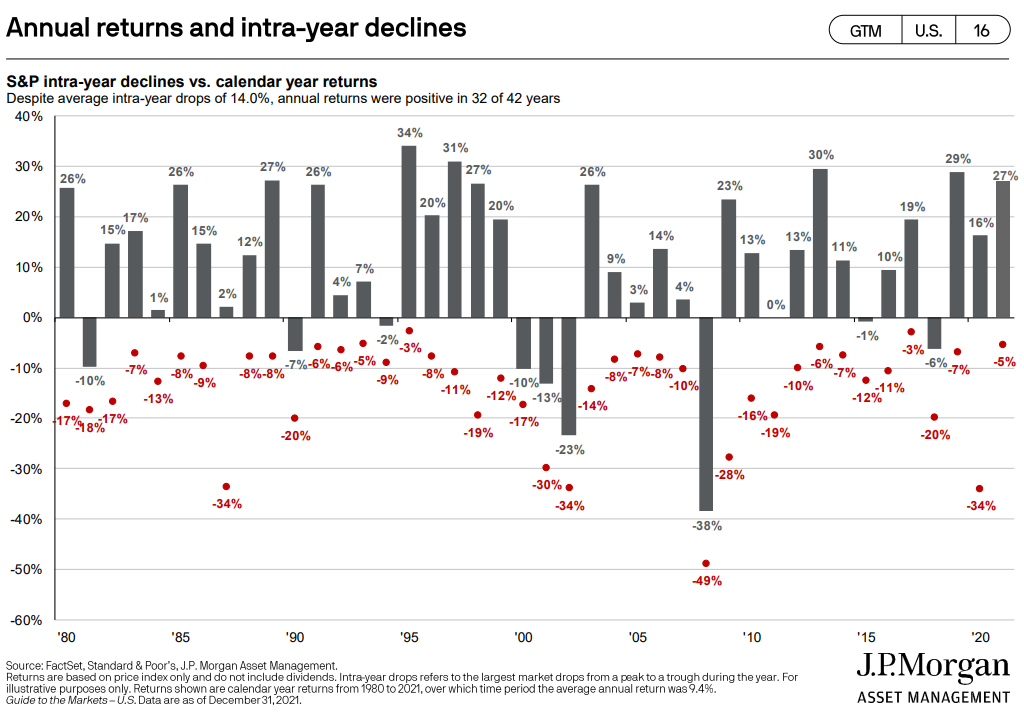 The chart above shows the S&P 500 annual returns (dark bar) since 1980, along with the largest intra-year decline (red dot). What you will notice is that most years result in positive returns, even when there is a large drawdown during the year. Last year only saw a 5% intra-year drawdown. Years with such modest declines have only occurred twice in the past 40 years. Point being that low volatility is the exception, not the rule. In the moment it can feel like things are falling apart when the reality is that volatility is to be expected.

While corrections are normal and often lead to further gains, they don’t occur in a vacuum. As we assess the current correction, two main aspects should be in focus.

First, the move we saw to the downside was very quick and one-sided while containing a number of historical anomalies. The market experienced a large downside reversal in the S&P 500 on Jan 24th when the index finished the day positive after being down by 4% during the day. This is an extremely rare occurrence that historically is only seen during bear markets. In addition, you had two consecutive days where markets finished negative after being up greater than 1.5% intra-day, another rare reversal statistic. Sentiment also reached extremely negative levels. The American Association of Individual Investors (AAII) Bull/Bear readings reached greater than 50% bears for the first time since May 2020.

In addition to the above, our own internal risk-on/risk-off indicators have shown market deterioration under the surface. For now, we would expect to see a bounce over the short-term because markets have become oversold. We already saw aggressive upside moves last Friday and continuing into Monday.  We expect some resolution to the situation shortly  leading us to either reduce equity risk  or rebalance current positions back to model weightings.

On a more intermediate-term basis, the most recent Federal Reserve meeting has reiterated the Fed’s commitment to hike rates and tightening policy. With inflation remaining elevated, the Fed  is preparing the markets for the end of  extremely accommodative monetary policy. We expect that in little more than a month  the Fed will begin to execute the new policy. Expectations for higher short-term rates are already being discounted in some of the lower quality areas of the market.  We would expect this to continue under a higher inflation regime. Because of this, we are planning to opportunistically shift some portion of our growth positions to higher quality value holdings that have historically outperformed during rate hike cycles.

The Fed could pivot at some point during the year in the face of geopolitical events or if economic growth and/or inflation slow significantly. But for now, we are taking the Fed at their word and expect the first rate hike since 2018 to occur at the March meeting, along with guidance on plans to begin the reduction to their balance sheet.

“I can’t believe the Bengals are going to the Super Bowl!”