The U.S. stock market has been generally rising since mid-March, settling about 8% lower than it was before the COVID pandemic began to assert itself on American shores.  The usual “Yang” reasons for the increase have been trotted out by the financial press.   These include:

This happy outlook ignores the “Yin” arguments which include:

So which case should we listen to?  Right now, some economists believe that the only thing keeping business and the economy afloat are massive amounts of borrowed-taxpayer money sent out to citizens and the business community, plus equally-massive intervention by the Federal Reserve, which has recently taken the previously-unthinkable step of buying corporate bonds.

People who are bullish on the stock market are betting that Congress and the Fed simply will not let stock prices fall.  People who are bearish believe that companies have become less valuable due to the lost quarter of productivity and earnings and expected diminished sales in the future, as people will have less to spend once the government gravy train dries up.  As those lower earnings reports come out, price/earnings multiples will spike, and we will see headlines telling us the market is more expensive than it has ever been.

The simple truth is that nobody really knows which argument is right.  The quiet chatter among financial professionals is that the best course is to stay modestly conservative, keep some dry powder, and look for buying opportunities without betting the ranch on a severe decline while cautiously participating in any upside in an increasingly fragile economy.  Without a working crystal ball, there is simply no way to know for sure.

One of the “Yang” assumptions mentioned above that has fueled the optimism over the past few months is the idea that we will experience a V shaped recovery in the economy. There is really no substantial data to confirm or deny this belief; it is just a hope that many hold. Unfortunately, as we begin to enter the phase of the recovery where the data should begin to “confirm” the V, we are being met with mixed results. 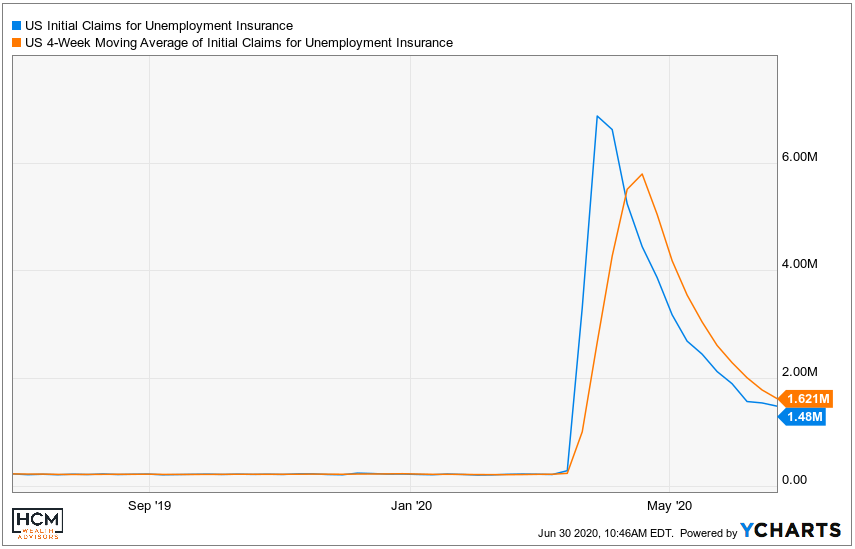 The chart above shows the weekly level of Initial Claims for Unemployment Insurance in blue and 4-week moving average of that weekly data in orange.   The good news is that both numbers are trending down.  The bad news is that after almost 3 months, we are still seeing Initial Claims levels around 1.5 million, almost twice as high as during the peak of the Great Financial Crisis.

As we move to the second half of the year, the level of uncertainty is expected to remain extremely high. Seeing unemployment levels remain at record levels for so long has many analysts questioning whether a V shaped economic recovery is even possible.  If the V shaped recovery is off the table, what will the trajectory of the recovery look like and how will that affect markets going forward?  Some were hopeful that the employment crisis would resolve itself as the country opened back up for business. However, we have already seen several states roll back their re-opening plans as concerns over an increase is cases has put them on the defensive.  In addition to collectively having almost 45 million people out of work, the additional $600 weekly unemployment benefit is set to run out at the end of the month.  If the program is not renewed, how will it affect the consumers’ ability to spend, to drive the recovery?  And, if it is renewed, it creates an incentive for people to stay away from work as many are making more on combined federal and state unemployment benefits than they did when working.  If people don’t go back to work there can’t be a  robust recovery.

Directly related to economic concerns, COVID cases have been rising at an accelerated rate in certain parts of the country.  As testing capabilities increase, we expect to see case counts naturally follow, though the trend we are seeing now can’t simply be explained by increased testing.  As mentioned above, we have now seen several states delay or roll back re-opening plans as they try to slow the spread of the virus. Both Florida and California have closed some beaches for the Fourth of July holiday.

While it is encouraging to see mixed data on hospitalizations and positive data on the overall death rate which remains low, the possibility of a second wave has caught investors’ attention.  And while some officials have already stated that full quarantines will not be re-imposed, those plans could change very quickly if conditions worsen.

If the economy and COVID didn’t provide enough uncertainty, don’t forget about the election in November.  In a normal year, this would already be front and center.  Yet, with the election just 4 months away, it sometimes feels like an afterthought.  That will change as we move closer to November.

The only constant in all of this has remained the Fed’s commitment to use their massive tools to provide support to the economy and markets.  They have added almost $4 TRILLION to their balance sheet in about 3 months.  For reference, it took them almost 10 years to add the first $3.5 trillion.  For now, the liquidity being provided has been enough to not only stop the market slide, but fuel an almost equally unprecedented rally.   While some remain concerned that the divergence between the market and the economy is unsustainable, others have become emboldened to take risk, with the belief that the Fed will solve any and all problems.

If we have learned anything throughout these last 3 months, it’s that a lot of crystal balls are foggy.  It is a good reminder that as much as we want to predict the future, we must make decisions based on the data that is available in the present.  After having increased our equity exposure modestly during the last several weeks, it is our intention to maintain a very measured pace of additional investment while holding some opportunistic “dry powder.”  We continue to monitor the data to make sure it continues to support the thesis that the Fed remains willing to do “whatever it takes.”

“If you do what you always did, you will get what you have always gotten.”