Quick confession: I stole the title from an article I saw yesterday.  I didn’t necessarily do so because I thought it was a great title; rather, it made me laugh and think, “Here we go again with these hyperbolic headlines.”  This is probably the 5th or 6th “most important week of the year” so far, if anyone is keeping track.  With that said, after the mild sarcasm, this could, in fact, be a very important week for the direction of the markets.

There is a saying in golf: your most important shot is your next one.  Once the ball leaves the club face, you can’t change the outcome (though some people have tried to by “talking” to their ball).   In addition, you can’t worry about shots you haven’t faced yet.  You need to focus on the shot in front of you, as you have the most control over that outcome.   Investment decision can be the same way.   Some may get too caught up in things that have already happened or that may or may not happen in the future, instead of focusing on what is right in front of them.  This week may serve as a good reminder to re-focus on the present.   This week brings a large number of high-profile earnings announcements, along with the Fed’s interest rate decision today. 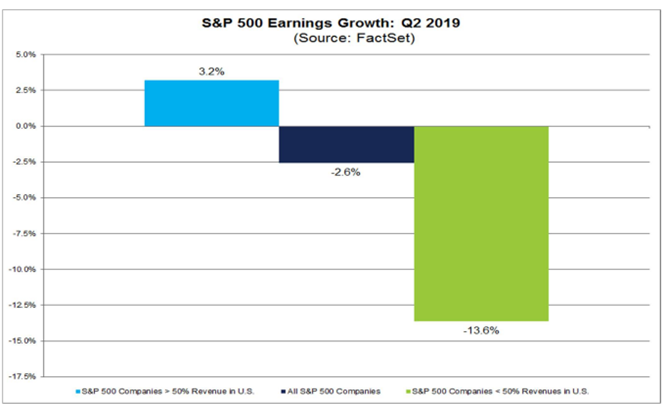 As we pass the halfway point of the “Most Important Week of the Year”, what investors should be paying attention to is pretty clear: earnings and the Fed.  Let’s start with earnings.  According to FactSet Earnings Insight, the blended earnings decline for the S&P 500 is -2.6% with 44% of companies in the S&P 500 reporting actual results.  That number could change over the next few weeks with the remaining companies in the index reporting, but if the current trend holds it will mark the first time the index has reported two straight quarters of year-over-year declines in earnings since Q1 and Q2 2016.  The declines become a little more significant when put into the context of what stock prices have done against this backdrop.  As mentioned above, you wouldn’t expect all-time highs to accompany a lack of growth.  But as we have mentioned several times over the past few weeks, these aren’t normal times.

If it wasn’t such a big week for corporate earnings, today’s Fed decision would dominate every single financial headline.  The market is pricing in a rate cut of anywhere from .50%-.25%, with the belief there is little chance that things will stay the way they are and no cut takes place.  Stocks have been grinding higher with anticipation of lower rates.  Anything to the contrary would likely cause significant volatility in both the stock and bond markets. The Fed has essentially been put up against a wall by the market.  If the Fed does cut, it would be the first time ever a rate cut has taken place with the unemployment rate under 4%.

Does anyone remember the US/China tariff issue?  It seems to have been forgotten in the shadow of the Fed, but the chart above shows the real-world aspect of how tariffs have affected companies with a global footprint.   HCM recently made the decision to reduce some of our international positions on the expectation of slower growth outside the US.  The chart above illustrates the headwind for international assets.  While we normally wouldn’t give much attention to any self-proclaimed “most important” chart, graph or article, we think it is certainly fair to say that the data released during this week will play an important role in shaping the direction of the markets for the foreseeable future.

Never a better time to focus on the present.