All eyes were on the first of three debates Tuesday night as Donald Trump and Joe Biden squared off in their first real opportunity to make their cases for becoming the next Commander in Chief.  Presidential debates weren’t actually a permanent fixture until 1976, and it wasn’t until 1987 that The Commission on Presidential Debates was established to ensure the debates would remain part of the electoral process.  Many have claimed Tuesday night’s debate was the most anticipated in history.  My guess is that, in addition to tuning in to get a better sense of each candidate’s plans, viewers also wanted to see if the “debate train” would go off the tracks.  I will leave that assessment to the reader.

We can say that for most, the debate probably didn’t change many minds.  The New York Times Michael M. Grynbaum points to a recent WSJ/NBC News poll that shows 70% of voters say the debates likely wouldn’t influence their vote.  So, for most, their winner was already decided before the first question was asked.   But regardless of who “won,” there is a surprisingly low correlation to the perceived winner of the first debate and who wins the election. 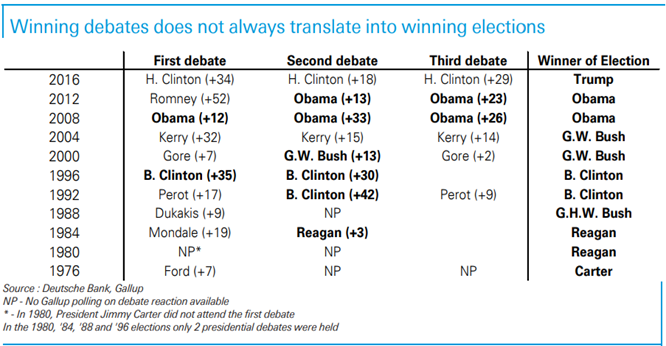 The chart above shows the results of every debate going back to 1976, along with winner of each election.  What you will see is that in the past 10 elections, with debate reaction data stretching back to 1976, only 2 candidates who were perceived to have won the first debate went on to win the election.  So, while everyone is arguing over who won the debate and what it means…there is a good possibility that it means absolutely nothing.  That doesn’t mean people won’t tune in to the next two debates and start the process of picking a winner all over again, but we may be putting a little too much stock into something most voters dismiss.

While we agree with most that the election could play an important part in the direction of the market over the next several months, we believe there are other important investment trends that may be getting overshadowed by the election.   Below are 3 that HCM believes to be the most actionable.

1. The Possible Resurgence of International Investing- It is well understood by most investors that a diversified approach to investing provides the best risk adjusted returns over the long-term.  Because of this, HCM will almost always have some portion of our clients’ portfolios dedicated to International exposure.  Over the past decade, the performance of US assets has surpassed that of both developed and emerging foreign markets.  This has led to a notable valuation gap between the two, as valuations for US markets relative to International markets are currently at an 18 year high according to Ned Davis Research.  In addition to valuations, Euro-area economic recovery rates have surpassed expectations and there appears to be a unified approach to providing both fiscal and monetary stimulus to enhance recovery efforts.  Meanwhile, US political theatre has cast doubts on further near-term stimulus efforts.  The promise of International outperformance has led to disappointment at various times during the past decade.  We believe the current rotation will be meaningful and we plan to add to our International exposure as sustainable trends emerge.

2. Value vs. Growth- Similar to the outperformance of US assets over International assets during the past decade, Growth stock investing has dominated Value investing.  This gap has widened since the start of COVID quarantines as many investors have poured money into technology and “stay at home” stocks.  Valuations for Growth stocks have reached extreme levels while Value stocks have maintained a very slow and uneven recovery with most still below their Feb 2020 highs.  While several catalysts could emerge, a stimulus driven resurgence in economic activity could lead to a rotation back into Value, as most of these stocks are more economically cyclical in nature.  HCM’s focus on Dividend Growth stocks naturally leads our portfolios to a Value bias. In addition, we have slowly increased our Value allocation over the past few months as economic conditions have improved.   If we see a continuation or acceleration of economic activity going forward, it will likely provide a tailwind for Value assets.

3. Inflation- Many are concerned that the unprecedented amount of stimulus, both fiscal and monetary, over the past few months will finally be the catalyst that unleashes inflation.  What makes this time different is the amount of stimulus going directly into the hands of consumers as opposed to sitting on bank balance sheets.  The hope is that these funds will go directly into the economy at a time when most supply chains have been affected by COVID.  Too much demand for too little supply typically leads to higher prices.  It could also force the Federal Reserve to raise interest rates, which is something, that for now, they have said they aren’t considering.  If inflation were to return, the fixed income assets that have performed so well over the past decade would likely find themselves in a difficult place.  Remember that when rates move up, bond prices must go down.  And with interest rates at historically low levels, bond investors could experience the perfect storm.  Adding assets such as inflation-protected securities, commodities, real estate, and precious metals could all help counter the effects of inflation.

“We choose our joys and sorrows long before we experience them.”

Disclaimer
Any tax or other advice contained in this document, including any attachments, is not intended and cannot be used for the purpose of avoiding penalties under Internal Revenue Code. No action should be taken on any information contained in this message without first consulting with your tax/legal advisors regarding the tax/legal consequences for your particular circumstance.


Talk to an Advisor