Some of you may be familiar with the work of M.C. Escher and his ability to make stairs do seemingly impossible things.  One of his most popular pieces, Relativity, depicts three distinct staircases forming a triangle.  However, this triangular formation runs into trouble towards the top of the work, as the staircase seems to bend the laws of gravity and forces the brain to do a little extra work in processing what exactly is going on.  I would encourage you to take a look for yourself.

On the subject of defying gravity, you have also started to hear the term “Melt Up” being tossed around.  I always found this term somewhat ironic considering that it is physically impossible to have something melt and go up.  Think about it for a second, candle wax doesn’t float above the flame as it becomes liquefied.  So maybe we are interpreting the term a little too literally, as the term “Melt Down” is sometimes used to describe a crisis that is spiraling out of control.   I suppose the opposite of that would be a situation where good things just keep happening in almost a chain reaction type fashion. 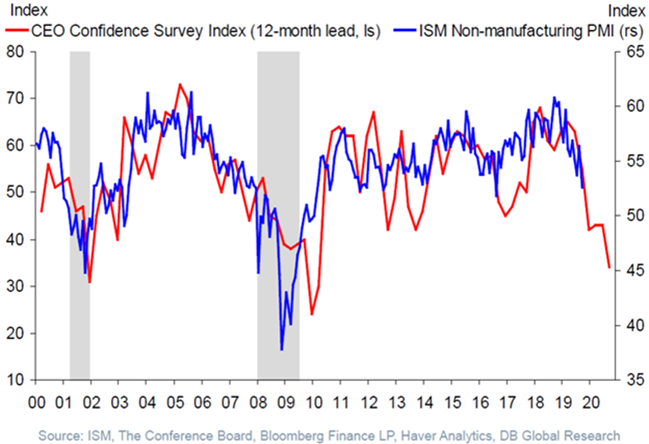 The chart above shows the CEO Confidence Survey Index in red and ISM Non-manufacturing PMI in blue.  The two vertical grey bars represent recession periods in 2001 and 2008.  What you will notice is that both lines have been trending down since the middle of 2018, with the CEO survey approaching its lowest level since the end of the financial crisis.

Some will be quick to point out that the timing of both the CEO Index and PMI drops match up closely with the beginning of the US-China tariff conflict, the same one that was just resolved for the 10th time in 5 tries…and yes, I am just as tired of writing about it as you are of reading about it.  But those numbers are also coming against the backdrop of more than just tariffs.

According to FactSet Earnings Insight, the 3Q 2019 earnings decline is -2.7% with around 75% of S&P 500 companies having reported.  That would mark the third straight quarter of negative earnings growth.  GDP growth just came in at 1.9%.  The Fed just cut rates for the third time this year.  And through all of this…stocks just made new all-time highs on the evergreen headline of “trade deal optimism”.  I’m not even sure Escher could create such a confusing visual and based on the chart from above, CEO’s may agree with that statement.

So back to the “Melt Up” that we keep hearing about, what exactly is it?  The actual definition in the investing word is “a dramatic and unexpected improvement in the performance of an asset class, driven partly by a stampede of investors who don’t want to miss out on its rise, rather than by fundamental improvements in the economy”(source: Investopedia).  Humans don’t like uncertainty by nature, so the brain will try and create rationalizations for almost anything, including assigning clever names to the market to justify price action.

The reality is that whatever it is called, the name doesn’t necessarily change what is actually happening.  Stock prices are going up and we are happy to participate in those gains.  HCM places a lot of emphasis on protecting downside moves in markets and part of that involves identifying when market trends are turning lower.  But a trend can also turn higher and we don’t want to completely dismiss those indicators.  The investing environment currently looks very much like Escher’s “Relativity” right now.  You have a less than favorable economic landscape, declining earnings growth, concerned CEO’s and a tariff situation that remains a revolving door of headlines…and a stock market that doesn’t seem to care about any of it.  Our brain may be looking at the picture and thinking it isn’t possible, yet we are staring right at it.

HCM remains fully invested across our models with an emphasis on high quality, large cap US equities.  Our investment committee continues to believe against the backdrop of underwhelming economic data and the absence of a signed, comprehensive trade deal, our current positioning represents a thoughtful balance of risk and return potential.