On July 28th, second quarter GDP fell -0.9% which started the debate about what the true definition of recession is. A common definition of economic recession is two consecutive quarters of negative GDP growth. This recent reading of -0.9%, combined with the 1st quarter decline of -1.6%, meets the criteria that most would consider a recession. However, not everyone is convinced that such a simple definition should be used to declare “official” recessions. The National Bureau of Economic Research (NBER) is the official organization that will ultimately determine if and when a recession starts and ends. The problem is, they usually take months to make their final decision, and by the time they do, the damage has already been done. Whether or not the current slowdown is ultimately deemed a recession is somewhat ceremonial. Recession or no recession, it’s clear that economic growth is slowing.

Despite the economic headwinds building, markets have shown resiliency over the past few weeks. After reaching a cycle low of 3,666 on the S&P 500 in mid-June, the Index has rallied approximately 12.5% as of the morning of August 1st. In addition to stocks rebounding, bonds have also rallied as market interest rates have moved lower. 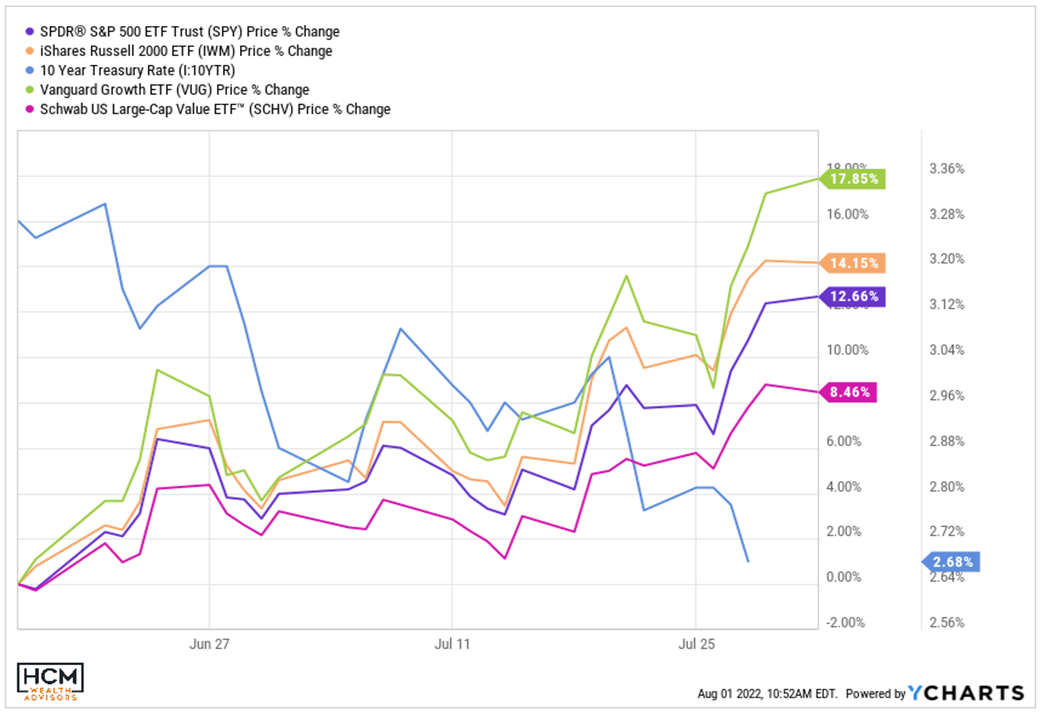 The chart above shows the performance of various indices as measured by their respective ETFs since the market cycle low on June 16th, along with the level of the 10-year treasury rate on the far right. As the market rallied, the areas that were hit the hardest on the way down – Growth (green), Small Cap (orange) - have shown the most strength while Value Stocks (magenta) have trailed the overall market as concerns about slowing economic growth hit the more cyclically sensitive sectors. In addition, bond yields have moved lower as concerns over recession outweigh the threat of further inflation.

While we are happy to see both the stock and bond markets rally, the question of sustainability remains unanswered. It is normal to see strong rallies during bear markets. In fact, some of the largest short-term market gains in history have occurred during some of the biggest bear markets. With that said, all market downturns must end at some point, and the fact we have experienced only a mild-bear market so far doesn’t mean that we must go down further. The final arbiter of what is to come will be the effect the current economic slowdown will have on corporate earnings over the next few quarters. So far, this is the third 10% rally during this current bear cycle with the current iteration being the longest and having the highest return.

While the stock market is a leading indicator of the economy, it doesn’t have a perfect track record. The ultimate determination of sustainability of the current rally will come from a combination of fundamental drivers along with technical guideposts to help confirm or deny the trend. The fundamental picture remains a mixed bag. As mentioned at the beginning of the article, economic growth continues to slow. The labor market remains strong, but a slight uptick in initial jobless claims over the past few weeks could be a precursor of further weakness and higher unemployment. Inflation remains at elevated levels, though a softening in commodity prices could provide some relief. Several strategists have declared peak inflation behind us. An inflation rate that begins to and continues to trend lower could be a tailwind for stock prices, especially if it allows the Fed to slow or pause their rate hike campaign.

In addition to employment, corporate earnings will be the other critically important fundamental factor in determining near-term market direction. So far, earnings have been better than many feared, with the current 2022 full year growth forecast hovering around 9% according to Factset Earnings Insight. The concern remains that any further or sustained economic weakness would lead to  earnings being revised lower. Earnings that come in lower than expected would likely take stock prices down.

The technical picture appears a little more favorable, with several breadth thrust indicators being triggered during this recent rally. Breadth thrusts are indicators that show strong, broad participation in market movements. Similar to building a solid foundation for a house, the more pillars (thrusts) that accumulate, the better chance the house (rally) has of standing firm. So far, we are encouraged with the short-term indicators that have triggered and will be looking for more intermediate term indicators to increase the probability the worst is behind us.

After adding cash back to stocks in our Advance and Defend portfolios several weeks ago, we remain neutrally weighted to equities. On the bond side, we still believe that slower economic growth will ultimately cap yields, with the possibility that longer rates continue to move lower (prices move higher) after hitting peak yield levels in mid-June.

“Opportunity is missed by most people because it is dressed in overalls and looks like work.”