Tulipmania occurred in the Netherlands during the 17th century.  Without giving the full backstory of how this phenomenon began, tulips were introduced to Europe from the Ottoman Empire around 1550.   These flowers were different from anything in Europe due to their intense color.  They quickly became a symbol of status and were seen as luxury items.   Speculators entered the market, buying and selling tulip bulbs with the expectation of making a profit.

As the mania grew, “tulip investors” began pushing prices to unprecedented levels, with the average price of a single flower exceeding the annual income of a skilled worker.  Some even sold for more than the price of a house.  Eventually, the story ended as you would expect.  People began to realize that these tulips had no true utility and were extremely overvalued. Investors began to sell in a panic.  Prices collapsed over the course of a week and many “investors” went bankrupt overnight. 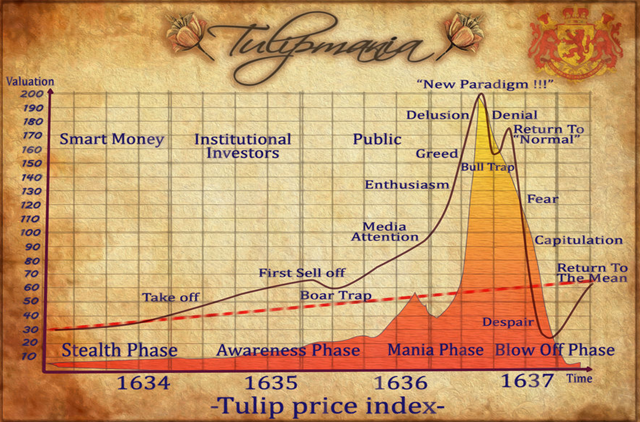 The chart above shows the price progression of this incredible bubble, annotated with some descriptions of investor emotions at different points in the cycle.  You can see how the range of emotions changes quickly as valuations change and prices move in a parabolic fashion, both up and down.

They lie in the concept of irrationality and how emotions infiltrate markets and cloud investors’ judgments.  We don’t see emotional headlines shouting that the market is trending sideways.  It is always a crash that is just around the corner or a raging bull market that you are missing.  In hindsight, the Tulipmania bubble seems so obvious that no one should have missed it.  However, when you are in the middle of either the excitement or panic, it is often difficult to think rationally.  People were playing the “greater fools’ game” paying far more for flowers than they were worth, believing that a bigger fool would come along and pay them even more.  It works until the music stops, and then the end is always the same.

Today’s markets don’t have the price extremes seen during Tulipmania, but some of the seemingly manic behavior has crept into the markets’ over the past few months.  The last two weeks is a perfect example.  We have gone from a rally after the Fed rate cut, to a swift sell-off after the re-re-re-escalation of tariffs between the US and China, to a brief recovery, to another sell-off and then another spike on Aug 13 based on news of a potential future “meeting” between the US and China to discuss tariffs…all while long term interest rates are approaching historical lows.  It is enough to make you toss up your hands in frustration.

Uncertainty can certainly drive nervous investors do irrational things, but the illusion of certainty often makes them do dumb things.  We aren’t in as extreme situation as Tulipmania, but there are valuation dislocations in the market today that concern us.  HCM continues to manage portfolios to respect those concerns.   We recently reduced our equity risk slightly by reallocating from higher volatility small-cap securities to large-cap and minimum-volatility positions.  Currently, we continue to hold our portfolios’ equity exposure at our neutral targets.  Our next step to reduce risk, if it becomes necessary, would be to reduce our equity exposure below our neutral targets in three separate stages.

The markets never provide a clear road-map going forward, so we continue to prepare for all outcomes, hoping for the best, but ready for the worst.

“I find the harder I work, the more luck I seem to have.”

You can also get started on your retirement plan or your wealth growth plan immediately. Don't wait for a boom or a bust. Get started today and build for the long-run.