The year 2022 continues to provide a challenging environment for investors. So far, we have had the worst start of any year in the S&P 500 AND the worst start of any year in the Barclays US Bond Aggregate.  As of May 10th, the S&P 500 was down approx. -15%, which would put it into the category of a normal correction if the decline ended here. Meanwhile, the Barclays US Bond Aggregate is down approx. -10%. This is not only the worst start to any year ever for the index, but the loss is almost 4 times as much as the worst YEAR for bonds since 1994, when the index returned -2.92% according to Bianco Research. While this level of stock volatility is a somewhat normal occurrence when looking at a longer timeline, the level of volatility in the bond market is extremely rare.

The combination of volatility between these two primary asset classes (stocks and bonds) has led to a rare year in the markets thus far. 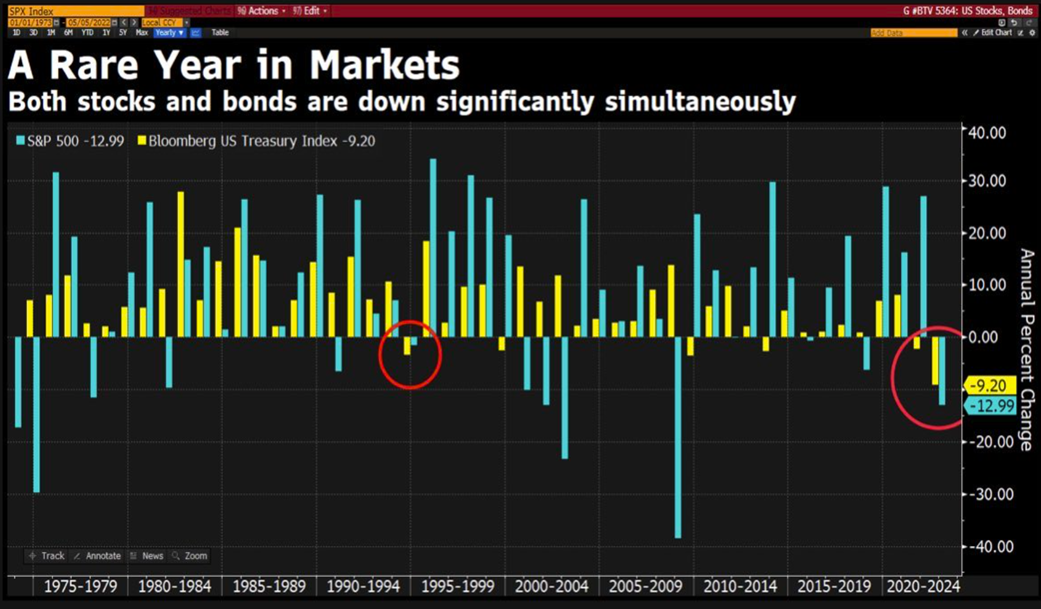 The chart above shows the annual returns for both the S&P 500 (blue bar) and the Bloomberg US Treasury Index (yellow bar) in every year going back to 1975. What you will notice is that in most years, at least one of the two asset-class returns are positive with most of those years resulting in both stocks and bonds providing positive returns in the same year. However, the two red circles denote the only two years where both stocks and bonds were negative in the same year: 1994 and now, 2022. In addition, you can see that the magnitude of loss in 2022 compared to 1994 is significant. All-in-all, 2022 has proven to be a historical occurrence through the first 4½ months of the year.

Looking forward to the rest of the year, many of the same questions remain while one new one continues to pop up: Have we reached the bottom yet?!?  While we can’t know the answer to that question until sometime in the future, we continue to asses the current situation from both a fundamental and technical perspective to determine what challenges remain and if the market has taken full consideration of these factors.

The first and biggest factor remains the Fed and how it is going to battle the record inflation that consumers are dealing with. It moved the Fed Funds rate up 0.50% during the recent May meeting, but with inflation running at close to 8% on a year-over-year basis, anything under 1% seems comically low. They have attempted to provide guidance for future rate hikes but their end target or “neutral rate” remains a mystery, with most projections still falling well below current inflation. Their ultimate goal for raising rates is to slow demand to balance out supply chain issues. Slowing demand enough to lower inflation while not pushing the economy into a recession is a low-probability event.

The market has finally come to terms with this assessment, as we have seen the most risky parts of the market coming under pressure over the last few weeks. Many of the names that saw significant price appreciation during the post-COVID lockdown rally have suffered the most, with some stocks down 70-90% from their highs. Defensive- and energy-related sectors continue to perform relatively well as markets consider the possibility of recession combined with the Fed’s inability to come to the rescue as it has in the past.

As for bonds, yields have moved significantly higher as the Fed remains behind the inflation curve.  The longer the Fed drags its feet on aggressively raising rates, the higher they may ultimately need to go to get inflation under control. This reality has led to a significant repricing in bonds that has resulted in large negative returns YTD. However, as economic growth expectations begin to slow in anticipation of Fed tightening, yields should start to level off or even move lower as longer-term bonds begin to focus more on recession risks than inflation concerns. In the past, recessions have been good for long term bonds.

From a purely technical perspective, markets have moved closer to selling exhaustion but, in our opinion, aren’t quite there yet. Several of the bottoming indicators that we saw trigger in 2000, 2008, 2016, 2018, and 2020 remain outside of levels indicative of capitulation by sellers. Even if these levels aren’t the ultimate bottom, they do provide an increased probability of positive returns of the next 6-12 months when used as an investment starting point. Once we feel those levels have been reached, we will look to deploy capital back into the more volatile parts of the portfolio.

While many headwinds remain, there still are opportunities for positive catalysts to emerge. A reduction in inflation, resolution of the war in Ukraine, or easing of the supply chain issues emerging from China are the main outcomes we see that could result in stocks moving higher. For the time being, the onus remains on the Fed to aggressively fight inflation while not tipping the economy into recession.

“Success is the sum of small efforts-repeated day in and day out.”