The dominance of a handful of the largest companies in the market, as measured by the S&P 500, is dramatic.

Scott Minerd, Guggenheim Partners CIO, said last week, “I have never in my career seen anything as crazy as what’s going on right now.  We are in ludicrous season.”  Some might say these comments are a little over the top, but just look at one of the extreme situations that Scott is referencing. 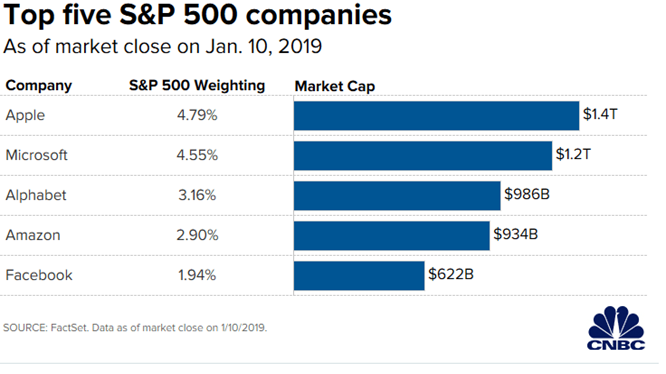 The chart above shows the Market Cap of the top 5 companies in the S&P 500, along with their corresponding weights in the index.   What you will notice is that, as of last month, the top five names represent more than 17% of the entire index.   For some additional perspective, one of HCM’s institutional consultants, Ned Davis Research put out a note this week stating that 29% of the All Country World Index (ACWI) is represented by its top 40 stocks.  This narrowing of leadership is reminiscent of the Tech Bubble, though we still have a way to go before reaching the peak of a 39% concentration of early 2000.

If we aren’t at “Tech Bubble” extremes, is it really any cause for concern?  Yes and No.  Narrow markets are like a house of cards.  They take a long time to create and can be extremely fragile if the wrong card is removed.  The popularity of indexing has mandated that every dollar invested in a cap-weighted strategy, such as the S&P 500 allocates 17 cents to those top 5 names.   It creates a buying cycle that feeds on itself.  At the same time, if these companies continue to perform well, the index will continue to move higher, even as valuations become more extreme.  This continued narrowing of the market remains a key reason why we maintain a portion of our U.S. large-cap equity exposure in an equal weight allocation to complement our capitalization weighted holdings.

Considering that valuations are already at very elevated levels, the economy has now gone a decade without a recession and there is a virus that has slowed down the Chinese economy, it is somewhat fair to ask if investors are ignoring the risks associated with a move to “ludicrous season.”  From an economic standpoint, it seems almost impossible to envision a current scenario where the global supply chain isn’t disrupted in some way from the spread of the virus and resulting quarantines.  Yet, the market continues to press higher as if nothing is wrong.   Massive liquidity injections from both the Chinese Central Bank and our own Federal Reserve have stemmed the tide for now.  Investors seem to be counting on more stimulus being added if the situation gets worse.

To Mr. Minerd’s credit, many investors are expecting a correction at any moment.  Most of these market doubters would likely also agree that trying to predict the market is a loser’s folly.  It is important to remember that the market is the ultimate arbiter of price and right now the market is telling investors to “keep the faith,” that central banks will have enough firepower to take each and every bad scenario off the table as they come, even those as big as disrupting the supply chain running through China.

The reality of the moment will be true until it is not. Those of us old enough to have lived through several bad markets know the current reality can change in a heartbeat.   This is important knowledge for those managing portfolios whose job is to provide sustainable-growing income through retirements that will last over many decades to come.

We continue to focus on maintaining a balance that is dictated by price and governed by reasonable forecasting.  Price trends remain very strong and must be respected for their potential to continue to move higher.  On the opposite side of the coin, it seems irresponsible to believe that the economic disruption resulting from the coronavirus will be ignored by investors forever.  It is already starting to have an impact as Apple announced that they would miss their revenue target this quarter due to supply chain issues directly related to the virus.  When one of the most recognizable companies in the world is providing warnings, you can be sure others will follow.

If we begin to see price weakness match the potential economic warnings, we will begin to shift portfolios toward a more defensive positioning.  But for now, the sermon of the central banks continues to be accepted as gospel.

“A photograph is usually looked at - seldom looked into.”