Two weeks ago, the Fed made a seemingly trivial update to their forecasts for interest rates going forward.  Throughout the recovery, the Fed has made a point to remind investors that they will keep rates low for “as long as it takes,” even suggesting that they would be willing to let inflation run hotter than normal in an attempt to be certain the economy is well on its way to reliable growth.  On the surface, moving up the timetable for a quarter point rate hike from 2024 to 2023 doesn’t seem like the type of thing that would significantly disrupt markets.   But in a world where the Central Bankers often seem to be the only thing that matters, we shouldn’t be overly surprised that almost anything that is the slightest bit “off script” might lead to a swift market reaction.

The Fed’s announcement was seen as an acknowledgement that their labeling of recent inflation as “transitory” might, in fact, not be entirely true.  The shifting of expectations for the first rate hike from 2024 to 2023 moved up the timeline for when the Fed may need to step in and begin fighting inflation.  But while investors’ positioning for inflation puts upward pressure on rates, the Fed’s jawboning is exerting an opposing force. 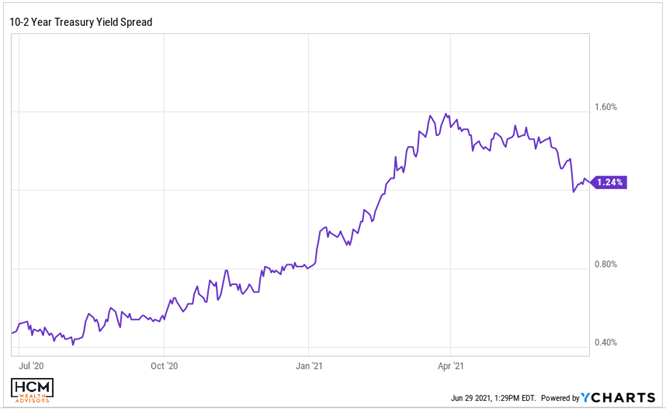 The chart above shows the spread between the yield on the 2-year Treasury bond and the 10-year Treasury bond, also referred to as the yield curve.  Over the last year, the spread increased with the anticipation of economic reflation leading to higher growth and inflation.   Yet, over the past few months, when it could be argued that inflationary pressures have been their strongest, we have seen the spread moving lower with the decline accelerating around the time of the Fed’s recent announcement.

So how does the Fed acknowledging inflation cause rates to move lower?  First, its important to remember the recent history of rate hikes and how they affected markets.  The only time there has been an attempt by the Fed to raise rates since the Great Financial Crisis was in 2017-2018 as the Fed Funds rate was moved from effectively zero to 2.4%.  This experience was short lived as the market could not handle higher short term rates and experienced an aggressive selloff until the Fed gave in and began lowering the rate in mid 2019, until finally reaching the floor of 0% during the early days of COVID.  The point is that the market hasn’t shown any ability to handle higher rates for any sustained period of time without throwing a tantrum.

So as the Fed acknowledges that rates may move higher, sooner…and it’s hard to write this with a straight face because we are only talking about a quarter of a percent almost TWO YEARS from now…it introduces   the possibility of a repeat of 2017-2019.  Mainly, an over-eager Fed raises rates too quickly and stops an economic recovery before it can gain significant traction.  Hence, the action in the bond market with the yield curve flattening (short term rates up, long rates down) as investors become concerned that the Fed may not stick to their commitment to allow inflation to run hot before acting.

In addition to concerns about the Fed moving too quickly, some leading economic indicators have started to roll over, calling into question whether we have reached (stimulus-induced) peak growth and/or peak inflation.

Lastly, the Delta variant of COVID has continued to spread across the world, leading some regions to again enact restrictive measures to slow the spread, even for those who have been fully vaccinated.

Through all this, the general equity market has held up well as the S&P 500 currently sits at all-time highs.  As the yield curve has flattened and expectations for reflation have been challenged, market leadership has changed as well.  The value oriented sectors that have been tied to the recovery trade have leveled off while the high-growth, tech leaders have come alive under the assumption that rates will remain low and inflation will in fact, be “transitory.”

Our view remains that the current backdrop favors equities over bonds, but we may look to take some profits in areas that may be susceptible to the change in leadership.  Markets have taken an “either or” view of the value/growth trade over the past year and a half.  But whether it is growth or value leading the way, markets remain beholden to Central Bankers around the world.  In the days following their rate hike projections, several Fed speakers were very careful to let investors know “they didn’t really say what you thought they said.”   For now, markets seem concerned that the reflation trade may be running out of steam.  If that is the case, the rotation could spill over into the broader market.  Market internals have weakened, but indices have continued to move higher.  Until the Fed convinces the market it is going to raise rates, the bull will likely continue to charge ahead.

“There are things known and things unknown, and in between are the doors of perception.”
-Aldous Huxley


Talk to an Advisor