After reaching this year’s lowest level, on May 19th, the S&P 500 staged a nice bounce back rally as rumblings of “peak inflation” continue to percolate. In addition to the bounce in stocks, bonds also advanced as 10-year Treasury yields declined to as low as 2.7% after breaching the 3% level earlier in the month. While the bond rally appears to have reversed fairly quickly (10-year yields are back over 3% as I write this), the equity rally has shown more staying power.

Some have called this the most predicted rally in history. Many are suggesting this is simply a bear market rally that will eventually give way to further declines. Others are suggesting this could be the start of something more sustainable and that the lows for the year are in. Whoever winds up being correct, both sides can agree that the genesis of this rally was a deeply oversold equity market that was overdue for a bounce.

Whether or not we include the term “bear market” in any description of the current rally seems irrelevant. The S&P 500 technically reached bear market territory on an intraday basis but never had a close that was off -20%. The term is certainly being used by the media to garner attention as, according to Bloomberg, there have been approximately 850 news articles mentioning “Bear Market Rally” over the past week. For reference, that is almost twice as high as the peak in 2020, so the notion that this is nothing more than a bounce before a larger drop is certainly a possibility. In addition, these types of rallies contain significant volatility, both up and down. 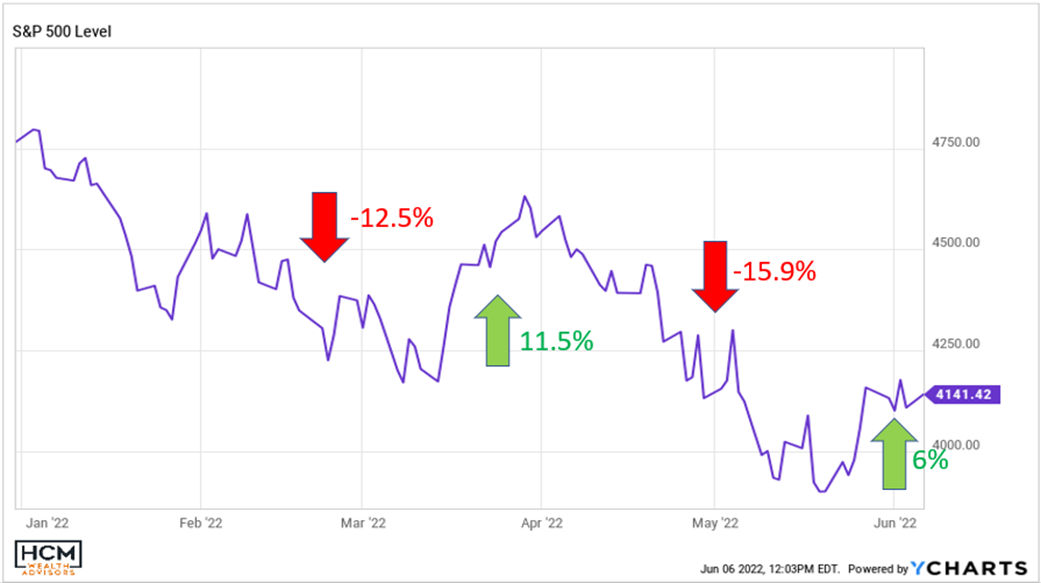 The chart above illustrates the volatility we have seen so far in 2022. The S&P 500, denoted with the purple line, has already seen three moves of greater than 10%, with the current rally right around 6% as of 6-6-22. Historically, bear markets have seen the most volatility to both the upside and downside. In fact, a majority of the largest, single day upside moves in history have occurred in the middle of bear markets.

A Bear Market by Any Other Name

So, if it looks like a bear and smells like a bear, does it HAVE to be a bear?! Well, no, not exactly. Whether we call it a bear or not, it is pretty evident that the market has begun the process of repricing the main risks at hand. The most pressing of these issues continues to be inflation and the Fed’s response to getting it under control. As of June 1st, the Fed has begun the process of reducing its balance sheet and is expected to continue to raise interest rates to tighten financial conditions and slow, but hopefully not stop, economic growth.

The real question remains: how far will they go to combat inflation? The market had initially priced in a neutral rate around 3%, meaning they still have a long way to go before we reach that target. However, recently there has been some chatter about the possibility that inflation may begin to soften before that 3% level for short-term rates. Therefore, estimates of how much tightening will actually take place could be too aggressive. If this is the case, it could open the door for risk assets to rally as the “worst case scenario” would be taken off the table.

As high inflation has affected consumers, it has also affected corporations. Higher input costs are leading to lower profits and/or lower demand when companies choose to pass through those costs in the form of price increases. This will eventually reduce earnings. With S&P 500 earnings expected to grow at around 10% for 2022, any reduction in growth due to increased costs may result in additional downward repricing of stocks.

But with macro winds swirling and many investors expecting the worst, are we set up for contrarian optimism? The market is trying to sway investors in that direction. While the current bounce was largely expected due to extremely oversold conditions, is there any evidence this could be the beginning of the end rather than the end of the beginning? So far, results are mixed. The macro concerns outlined above are still creating tremendous uncertainty which is being exacerbated by the Fed’s slow approach to attacking inflation.

For now, the current rally has shown some positive signs, but not enough, in our opinion, to warrant the all-clear signal. You only need to look back to the middle of March to see how large market moves can fool investors if those rallies aren’t showing sufficient internal signs of strength. After 2018 and 2020, many investors have come to believe that all recoveries happen in a swift V shaped pattern. This cycle may look more like a W and take longer to play out. The time will certainly come to add meaningful risk back to portfolios, we just don’t believe that day has arrived yet.

“Life can only be understood backwards; but it must be lived forwards.”
• Søren Kiekegaard