Nothing drives sentiment more than price.  It’s a concept that is well accepted by academics but remains hard to fully grasp in practice.  Look no further than the cryptocurrency market for an example.  It feels like everyday we read about a new “coin” being released that will be the next hot speculation tool.  It has become somewhat normal to read about young, inexperienced investors becoming millionaires overnight.  When these stories start popping up with regularity, it is logical to wonder if “Crypto” should be something we add to our portfolios.  It has become clear that cryptocurrencies are now a major market topic.  Whether that is sustainable is yet to be determined.

There are currently hundreds of crypto tokens available for purchase, but the two main considerations for real use and utility are Bitcoin and Ethereum.   Bitcoin is the largest and most well-known cryptocurrency in the market with Ethereum starting to gain more notoriety.   On the surface, these two might seem to be the same but there are significant differences between the two.  Without getting into the heavy, technical differences, think of Ethereum as a platform that allows certain transactions to take place and be recorded on the blockchain ledger while Bitcoin remains more basic, simply a speculative holding that can be bought, sold, and transferred.   Both are built around the premise that the networks these tokens exist on cannot be hacked or altered in any way, which should make things like fraud or theft more difficult…in theory. 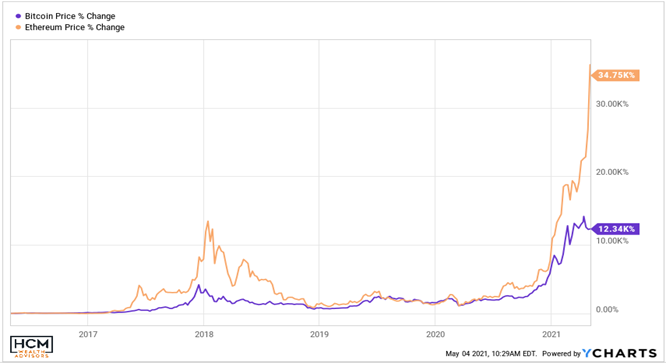 The chart above shows the 5-year trailing return for both Bitcoin (purple) and Ethereum (orange).  These are the type of returns that created the phrase mentioned earlier, that nothing drives sentiment more than price.  However, you will notice it hasn’t been a one-way street.  There was significant volatility in 2018 and most of the gains have taken place over the last 12 months.

The concept for cryptocurrencies isn’t necessarily a new idea, at least from a theoretical standpoint.  For thousands of years, investors used gold as a way to diversify away the risk of fiat money (or whatever currency was being used at the time) that lost purchasing power through inflation or some kind of debasing effect.  The appeal was/is that gold is hard money, so the supply can’t be adjusted in a significant way.  Estimates vary, but the entire worldwide supply of gold could be melted down and fit into roughly 4 Olympic size swimming pools!

Bitcoin operates in a similar fashion, with a finite amount that is available.  Therefore, if current protocols remain in place, the supply of Bitcoin will stop growing around 2140.  For some comparison, M1 money supply in the US has grown 410%....in just the last 3 years!   It is concern around the future health of the US dollar (and other major currincies) that has given cryptocurrencies some level of validity.

In addition to the supply being finite for Bitcoin (Ethereum doesn’t have total supply constraints but it does maintain a controlled release of supply), the idea behind blockchain technology is the ability to run a decentralized network that can record transactions in real time.  So in theory, this network would keep a running ledger of every transaction and the ledger couldn’t be altered, making fraud much more difficult on a blockchain network.

While the theoretical aspects of cryptocurrencies certainly warrant attention, they have unfortunately  been ignored in favor of simply using price to validate anything and everything in the crypto space.  Dogecoin may be the perfect example of the type of reckless speculation that has entered the crypto market.  The token was originally created as a joke to mock cryptocurrencies in general.  In December, the coin traded at roughly $0.003 and had absolutley no use or utility whatsoever.  Now, the coin trades at roughly $0.53.  When you see gains of this magnitude with almost no reasonable argument to back it (other than the hope you will be able to sell it to someone else at a higher price), you have clearly entered the world of pure speculation.

HCM isn’t making a determination about the future viability of cryptocurrencies.  The argument can certainty be made that cryptocurrencies provide some type of hedge against the US dollar collapsing, but that has yet to be proven.  Similar to gold, cryptocurrencies are impervious to valuation and possess no current cash flow potential (the lending programs are too new to be deemed reliable).  In addition, the volatility in price movement remains very high, with daily swings of +/- 5% or greater a normal occurrence.  With these characteristics, and for other reasons, cryptocurrencies still remain extremely speculative.

As long as clients understand this,  speculative positions can certainly be part of a diversified portfolio if the position size is scaled correctly.  HCM currently has no plans to add any cryptocurrency to Firm portfolios, but we are happy to speak with clients and help facilitate the process for those who want to add exposure on an individual basis.

“Time destroys the speculation of men, but if confirms nature”
-Marcus Tullius Cicero