After an extremely rocky start to the year, the last few weeks have provided some respite for equity markets. A strong rally that began the day the Fed raised rates for the first time since 2018 has continued through to the quarter’s end as investors continue to digest projections for earnings, economic growth, inflation, and the path of expected rate hikes. The conflict in Ukraine is ongoing, along with supply issues for the various commodities that are produced and exported from the region. China is reporting a significant uptick in COVID cases and has moved to lock down a number of cities to stem the outbreak.  This has led to renewed fears of supply chain disruptions.

Q1 was certainly a challenging environment for investors, as returns for both stocks and bonds ended the quarter in negative territory. In addition, we have seen yield curve inversions across various time frames, some of which haven’t appeared since 2007. Most notable and arguably most important, the 2 year/10 year spread inverted last week for the first time since 2019. 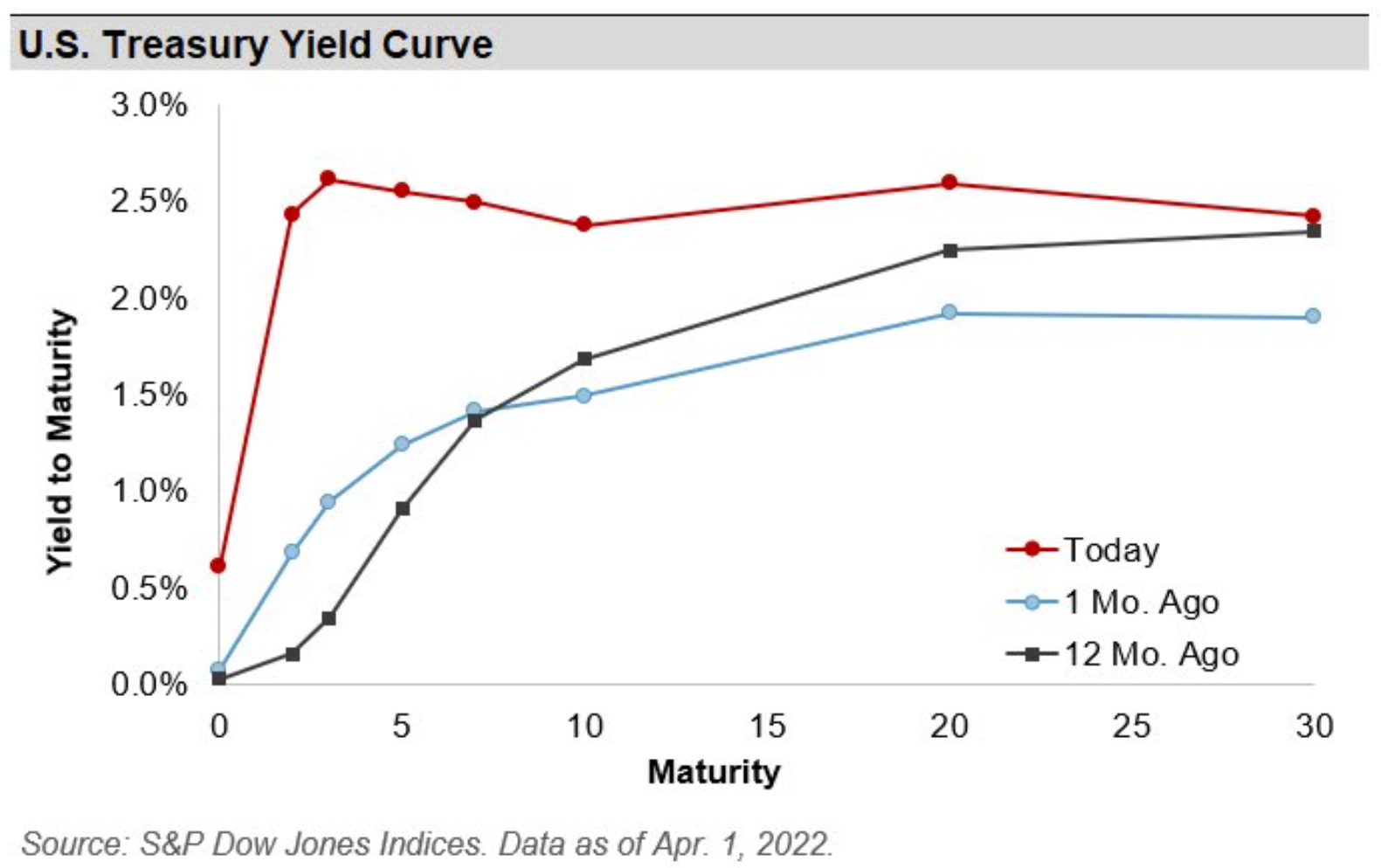 As a quick reminder, the yield curve denotes differences in various interest rate levels along the entire spectrum of maturities for US Treasury bonds. The chart above illustrates the curve at various times over the last year.  An inversion takes place when a shorter maturity yields more than a longer maturity. We highlight the 2 year/10 year inversion above as you can clearly see the line in red having a dramatically different shape than the lower lines.

Why Should We Care About the Shape of the Treasury Yield Curve?

The 2 year/10 year yield curve inverting has historically been a reliable predictor of recession. There is some lag time between when the inversion happens and when the actual recession begins, but the more important takeaway is that the bond market is seeing economic growth slowing. Looking at the global landscape, it is easy to see why bonds may be pricing in a slowdown. Inflation remains high, which at some point will lower demand as consumers change their spending habits to avoid higher prices on goods that may not be “necessities.” In addition, corporations will see their profit margins shrink as higher input costs will either need to be passed on to the end user or absorbed.

Despite the warnings from the bond market, equity markets seem to be taking this all in stride, almost oblivious to the headwinds that, for now, don’t seem to be abating. The rally off the first quarter lows has been impressive, reminiscent of the March 2020 recovery where the bear market caused by the onset of COVID was erased in the blink of an eye. Could it be possible to see a repeat of that rally?

It’s not impossible, but it isn’t very likely, either. Why is that? The COVID recovery, along with most major market recoveries since 2009, have been accompanied by some type of accommodative Fed action (rates cuts, QE, etc.). And almost every single time the Fed had room to act because they were not restricted in any way by inflationary pressures. Today, inflation is running at its highest level since 1981, along with additional supply issues that don’t seem to be getting better any time soon. With an explicit mandate to “fight inflation,” the Fed now has very little room to ease policy.

The market still seems to think the Fed isn’t serious about inflation. Powell and company continue to talk about being tough on inflation, but only raising rates 0.25% when inflation is running at 7.5% doesn’t seem very tough. In fact, many believe the Fed is so behind the fight that rate markets are now pricing in two 0.50% hikes in May and June. The Fed hasn’t raised rates .50% in a single meeting since May 2000!!

The biggest risk we see now is that the market still underappreciates the Fed’s resolve to squash inflation and/or the Fed’s reluctancy to favor stable market conditions over lower inflation. To be fair, investors have been conditioned to expect a “rescue” of some sort when things get too volatile. They have also been conditioned to expect quick resolution. The 2000 and 2008 bear markets were the last two sustained periods of decreasing market prices, both accompanied by recession. Those drawdowns lasted 18 months on average. Since 2009 and the introduction of Quantitative Easing, the average drawdown has only lasted about 4 months.

Maybe the Fed has changed the pysche of the market enough to where market cycles have become much shorter and investor expectations for quick turnarounds are justified, despite whatever headwinds exist on the macro landscape. Our view remains that the Fed’s ability to provide a safety net has been diminished, and we’re not sure the market fully appreciates that. However, if the Fed pivots and accepts higher inflation in exchange for continued policy accommodation, the market will have won this game of chicken and very well could continue to new highs.