What started as a trickle of news during the initial stages of the Ukraine conflict has turned into a tsunami of human suffering and global financial disruption.

It’s a stark reminder that war is the most serious of conflicts. The immediate financial impact of the war on the U.S. and international community has been through energy and currency markets. Also, the flattening of the U.S. yield curve and declining growth forecasts for this year’s first quarter had already pointed to rising recession risk; the financial disruption caused by the war increases that risk.

First and foremost has been the situation in the oil market. According to Reuters, Russia is the world’s top exporter of crude and oil products combined, with exports around 7 million barrels per day, or 7% of global supply.  In an effort to cripple Russia financially, the US banned Russian oil imports on Tuesday and the UK announced plans to phase out their imports of Russian oil as well.  Oil markets have reacted aggressively to this possible outcome, spiking to levels not seen since 2008. 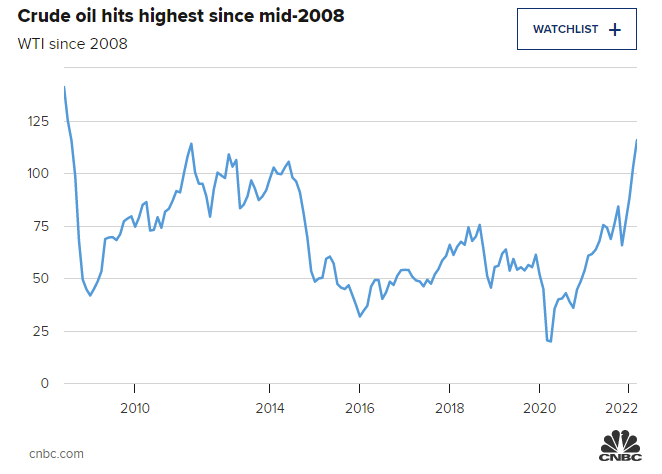 In addition to oil, wheat, and aluminum, other commodities produced in the region have spiked in price as fears of supply shortages increase.  While no actions have been taken as of Monday morning, governments will need to consider how further sanctions will disrupt commodities markets and possibly move prices to levels that have historically led to demand destruction and in many cases, recession.

According to data from Luca Paolini, chief strategist at Pictet Asset Management, every time in the past 50 years that oil prices, adjusted for inflation, rose 50% above trend, a recession followed.  The most recent move in oil has driven prices above trend and therefore, likely increased the probability of recession in the coming year.  Six months ago, the probability of recession was almost negligible. The good news is that any resolution to this conflict could bring oil prices down just as quickly as they went up.  However, the two sides don’t seem to be close to a resolution at this time.

The spike in commodity prices has put the Fed in a difficult position as it will put upward pressure on inflation.  However,  significant increases in commodity prices, especially oil, could also reach a tipping point where demand is affected and economic growth begins to slow.  We highlighted the Atlanta Fed GDPNow forecast for next quarter in our most recent monthly webinar and it was right around 0%, which was before the significant jump in commodity prices.  The Fed certainly understands that recession is one way to reduce inflation pressure, but at what cost?  They also know that if they are too aggressive in tightening policy in an effort to bring inflation under control, they could stall the economy.  Not only that, but aggressive rate hikes and/or balance sheet reduction would likely have further negative effects on stocks prices. If possible, the Fed would prefer not to upset the markets any further, especially at a time when stocks are already under pressure. To do so would reduce the wealth effect and potentially worsen any recessionary forces.

All in all, the Fed has some very tough decisions in front of it.

The bond market has picked up on this dilemma and is beginning to trade accordingly.  As the situation in Ukraine has unfolded, longer bond rates have actually come down while shorter end rates have moved sideways.  Whether rates are moving lower in reaction to the fear of slowing growth or the belief that inflation will subside on its own remains to be seen.  Going out one year from now, the yield curve is actually pricing in an inversion (an inversion occurs when two-year yields  are higher than the ten-year yields).  Inversion often precedes recession, though the subsequent timing of the recession is not predictable.  Either way, traders are betting on issues to arise in the near future.

Considering the average market correction over the past 75 years is around -14%, the S&P 500 being down around -12% from all-time highs feels like a small victory under the circumstances.  The Dow Jones has faired better, down around -9% while the Nasdaq is right on the cusp of bear market territory, down -20%. Areas of the market that we would expect to perform well on a relative basis (value, defensives, energy, staples) have done so while other areas, particularly Europe, have been more negatively affected by the situation in Ukraine. Not surprisingly, market sentiment remains extremely pessimistic.  Historically, when negative sentiment reaches the levels we are currently seeing, the stage has been set for a short-term rally.  Any headline that offers promise for a resolution to the situation in Ukraine could set the stage for such rally.  However, if the conflict continues to drag on and uncertainty remains high, we may need more than extreme negative sentiment for stocks to find solid footing.

“There was never a good war, or a bad peace.”
-Benjamin Franklin