Over shorter time frames, sentiment can play a large role in guiding the direction of the market.  In fact, sometimes sentiment can become so powerful that it causes investors to re-evaluate their pre-conceived notions.   Most of the time sentiment stays in a controlled range, never getting too high or low.  But during those rare instances when it becomes excessive, it takes on the art of interpretation.  The momentum trader may see a trend that is gaining steam, while the contrarian investor may see a situation that is simply unsustainable.   At its extreme, sentiment is a simpler way to describe market emotions….and none are more powerful than “Fear and Greed.”

During the initial phase of COVID lockdowns across the United States, markets suffered from an extreme case of fear with a -35% drop in the S&P 500 over the course of 21 days...the fastest bear market in history.  But incredibly, the market has done a complete 180 and moved from extreme fear to some parts of the market becoming greedy. 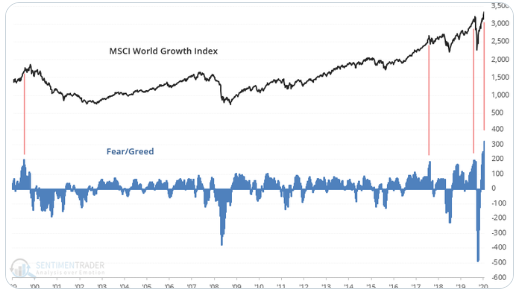 The chart above helps illustrate this swing.  It measures the price level of the MSCI World Growth Index (black line) against it’s Fear/Greed reading (blue bars), going all they way back to 1999.  The vertical red lines indicate the four highest readings for the Fear/Greed gauge over that time period.  You will notice that currently, the Fear/Greed readings is showing its highest reading ever.  This is also coming off the lowest reading in its history just months before.  The red lines point out that when readings are excessively skewed to the “Greed” side, a near term top had been typically reached.

Why have investors who were so fearful just a few months ago become so greedy, all while staring down one of the most uncertain financial periods in recent history?  While the answer to that question may be rather simple, the implications of what it means are not only more important, but a little less direct.

The massive amount of fiscal and monetary stimulus provided the tourniquet to not only stop the market’s bleeding in March, but has also been the motivation to change the mindset of investors.  The combination of historic increases in the money supply, combined with expanded purchase programs covering multiple assets, mixed in with an implicit promise to do “whatever is needed” has removed “fear” from investors’ vocabulary.  As that fear has subsided and prices move higher, it continues to create a euphoric feedback loop.  With only 5 stocks (Apple, Amazon, Facebook, Google, Microsoft) now representing almost 23% of the S&P 500, many are drawing comparisons to the tech bubble of the late 90s and early 2000s.

One of the main characteristics of the tech bubble was the ability of price to justify narrative, no matter how crazy that narrative looked in retrospect.  The idea that investors could pay outlandishly high prices for companies that were justified by “stories” that did not have a foundation to support them was fostered by greed.   As we compare the tech bubble to today’s market, the extremes we are seeing, particularly in certain tech stocks, is concerning.  The willingness to ignore the macro economic backdrop remains a direct result of faith in central banks to cure all, in effect betting on a moral hazard.

The implications to this new view of investing could be profound if it proves to be sustainable.  The idea that the market could transition from being a collective measure of future business prospects to simply a function of government policy is unnerving.   It would likely force interest rates to remain low, possibility indefinitely, and put pressure on those who depend on their portfolios for retirement income to take on additional risk, all at a time when assets are historically expensive by most measures.   In addition, a market that is dependent on a constant flow of stimulus will only be more susceptible to extreme volatility when that stimulus is interrupted.

The challenge we continue to face in both the short and long term is reconciling this new reality.  As we have recently seen a spike in COVID cases nationwide, the prospects of the “V” shaped economic recovery have lessened.  As earnings season begins, we will get our first glimpse into how much damage has been done at the corporate level.  Expectations have been set fairly low, so bad numbers won’t necessarily mean as much as the guidance for the future.  Will that guidance be validation that the current level of greed is justified or will it provide just enough fear to break the euphoric spell?

HCM remains committed to a cautious approach of balancing risk and return in the current market environment.  We still believe that dividend growth remains a crucial part of generating retirement income as we expect interest rates to remain low for the foreseeable future.  While bonds won’t offer much in the form of income, they are still an important part of balancing equity risk, especially with equity valuations at elevated levels.

“Start by doing what’s necessary, then do what is possible; and suddenly you are doing the impossible.”