The news flow over the past few weeks has been dominated by COVID and the resurgence of cases in the US due to the Delta Variant.  As of yesterday, the 7-day average in the US has been over 100,000 cases for 3 consecutive days and approaching levels not seen since the most recent surge in December 2020-January 2021.  However, while case counts continue to rise, the level of hospitalizations and deaths are currently tracking well below the levels seen in Dec-Jan.   In addition, some strategists have projected that the current surge in cases may be set to peak in the next week or so.  Looking at the United Kingdom as a case study, the country had a significant surge that began around May 20 and reached a peak around July 20, a period of about 60 days.  The current US surge began June 30.  If the US follows a similar path, it would put the peak of cases around the end of August.

As the market continues to grapple with how COVID may affect growth going forward, one area that has quietly improved has been corporate earnings. 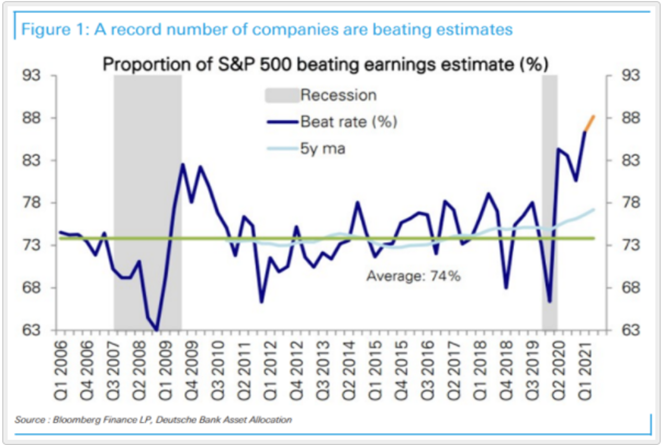 The chart above shows the proportion of S&P 500 companies that have beaten their estimates for the previous quarter.  With the current average beat rate around 74%, this quarter is coming in  around 85% with extrapolated projections going to 88%.  As COVID has dominated headlines around  the world, companies are quietly getting back to normal and producing very solid earnings as a result.

We have acknowledged before that the earnings game on Wall Street is set up to be almost impossible to fail.  Analysts start with sky high expectations, investors latch onto those numbers and then the analysts quietly lower their projections all the way up until the release.  With the newly lowered bar, most companies easily surpass the lowered expectations and everyone is happy. But even after accepting this fact, the numbers were are seeing now are a welcome reminder that the post-COVID rebound remains strong.

Digging into the actual figures from Factset Earnings Insight, with 89% of S&P 500 companies reporting actual results, the Q2 blended earnings growth rate is 88.8%!  That is a huge number and the highest since Q4 of 2009.  Going forward, over the next two quarters earnings are expected to grow by 28% and 21.4%, respectively.  Now, some will argue that all of these projections are already “priced into” the market and that the possibility for future returns is limited.   This could certainly be true, but the flip side is that strong corporate earnings growth can also provide support for elevated market levels.

Much has been made about valuations over the past few years.   In fact, you would struggle to find any common valuation metric (Price/Earnings, Price/Sales, Price/Book, etc.) that wouldn’t be considered historically elevated.   However, some of this has to do with the depressed level of earnings that we saw during the initial phases of the COVID crisis.  As those numbers begin to roll off of trailing 12-month figures, we will see valuation levels improve…even without seeing prices drop.  In addition, valuations by themselves have never been an accurate predictor of short-term market moves.  What they have been accurate in predicting is longer term returns relative to an average market return.  Elevated valuations simply imply that based on history, returns over the next 10 years will likely be below average.

As we move into the later part of the year, there are still many things that remain uncertain.  Will the Fed begin to taper?  Will taxes go up?  Will there be a comprehensive infrastructure bill?  Will inflation run hotter than expected?  Surprises in any of these areas would likely have an impact on markets over the short term.  What we do know is that earnings have recovered very nicely since  April of last year and that should be fairly supportive for equities going forward.  That doesn’t mean we can’t have a correction.  The market has now gone almost 190 days without a 5% correction so some would say we are “due”.  But any correction would most likely represent a buying opportunity as the conditions for recession, and therefore the bigger bear markets, simply aren’t present right now.   Growth remains solid, job growth continues to improve, and the Fed remains accommodative.

I find that the harder I work, the more luck I seem to have.  Thomas Jefferson