Of all the one-line investment mantras investors have followed over the years, none would have made you more money than the little ditty in the title.  As I have described it to clients before, the Fed is essentially an organization with unlimited funds to influence markets and doesn’t care if they make money. Their expressed purpose is to strategically inject liquidity into the financial system with the hopes of facilitating economic growth.  Another term to describe this activity is “Quantitative Easing” (QE).  Since the Great Financial Crisis, there have been 3 “official” rounds of QE and a slight variation termed Operation Twist.  Most would consider these programs a success, but not necessarily for their stated goals of accelerating economic growth.   The stock market has been the biggest winner since the first round of QE was introduced in December 2008.  During that same time, both GDP growth and inflation have held steady near 2%.  This gap in growth rates has led many analysts to the conclusion that QE is the ultimate stock market steroid.

Based on the notion that QE is an indirect support for the market, it isn’t surprising when Chairman Powell launched the latest version of Fed support last month, he went out of his way to remind everyone that this “isn’t QE”. Rather, he said that the latest round of balance sheet expansion was aimed directly at easing strains in short-term money markets by supplying more liquidity to the system.  Let’s see what the market thinks… 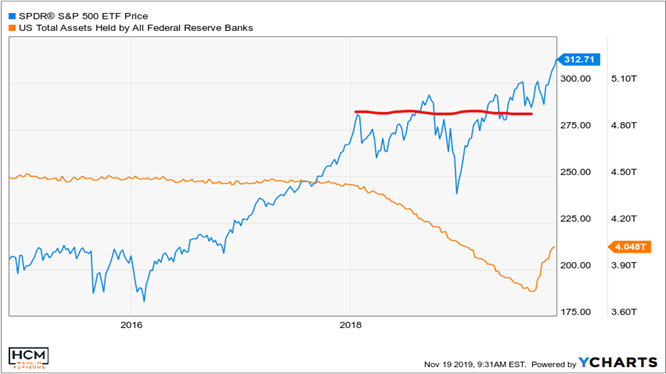 The chart above shows the value of the S&P 500 ETF(SPY) in blue and the Total Assets held by the Fed in orange.  You can see as the Fed reduced its holdings from the beginning of 2018 until Oct 2019, the market was volatile and essentially flat, the red line.  But once “not QE” took hold and the Fed’s asset base started to expand again, the market has broken out to new all-time highs.

Semantics aside, it seems for the time being that the market is treating this latest round of liquidity injections by the Fed as the real thing.  With no major tariff announcements and earnings season providing a lack of major surprises, positive or negative, the market has almost gone into auto-pilot.  The S&P 500 has now gone 30 consecutive trading sessions without suffering back-to-back losses.  Meanwhile, 10-year Treasury rates have leveled off right around 1.85% and credit spreads remain at very tight levels.  Investors don’t have a lot to complain about right now.

One of Warren Buffet’s most famous quotes is “Be fearful when others are greedy and be greedy when others are fearful”.  It is a more eloquent way of saying buy low and sell high.  And while we have all heard those nuggets of investor wisdom over and over again, our brain still struggles to follow them.  We want to believe the party will go on forever or if we just hold our position for one more rally, we can squeeze out some additional return.

Most of the market price trends, both long and short, that HCM follows are pointing up and it gives us some confidence that this rally can continue into, and perhaps through, year end.  In addition, we have learned over the past decade that fighting the Fed is a loser’s game.   More importantly, the Fed has re-established itself as the hunter in the woods with an arsenal of tools ready to take on any and all bears it sees.  Whether it actually CAN isn’t completely relevant at the moment, as long as investors BELIEVE it can, that itself is enough to keep the party going for now.

Yet, even the best bull markets don’t go up in a straight line.  In fact, the market has only spent around 5% of its entire trading history making new all-time highs.  HCM took the opportunity last week to rebalance client portfolios and take advantage of gains provided by the most recent move higher in equities.  Most of these gains were moved into our fixed income positions in order to get portfolios back in line with their targets.   Rebalancing is an important part of our investment process to ensure we capture gains before the market has a chance to take them away.

As for what drives markets going forward, the usual suspects of economic growth, trade talks and geopolitical issues will remain in sharp focus.  For now though, the Fed has been successful in jumping to the front of the line.

“I find the harder I work, the more luck I seem to have.”
-Thomas Jefferson