Deal or No Deal…

Some of you may know the popular television show “Deal or No Deal”. The premise of the show is fairly simple, but the drama of the decision makes it exciting.  The player chooses one of 26 different briefcases, each containing a marker for various amounts ranging from 1 cent to $1 million.  The player then eliminates the remaining cases one by one, revealing the amount inside as the decisions are made.  After several possibilities are removed, the “banker” tempts the contestant with an offer to stop playing in exchange for a certain amount.  The contestant must choose between accepting the deal or continuing to open cases in hopes of getting a better offer and possibly winning a million dollars.  Of course, there is always the chance of going home with 1 cent.  The most dramatic part of the show happens when a contestant emphatically announces, NO DEAL! while the audience cheers.

Last week, the US and China both declared NO DEAL!   Needless to say, the world audience was not cheering. 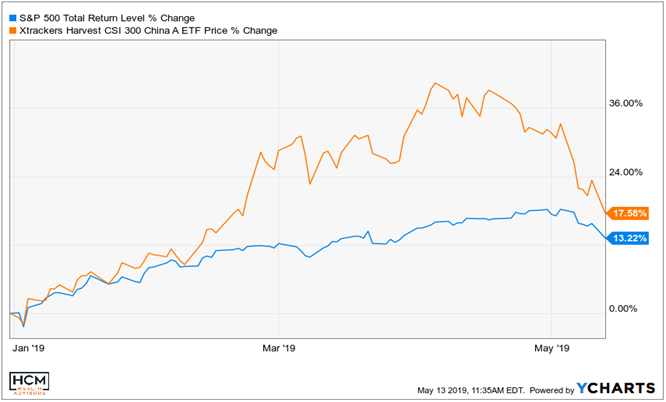 The chart above shows the year-to-date, total return performance of the S&P 500 in blue and the Xtrackers CSI 300 China A share ETF in orange.  The main takeaway is not only the massive performance in Chinese equities during the first 3 months of the year, but how quickly the gap has closed relative to the US over the past 45 days, with a notable acceleration in loses over the past 10 days.  On the surface, it apears the break down in trade negotiations is having a bigger impact on China than the US.

It didn’t take long before the finger pointing began as to who was responsible for the trade talks breaking down.  The most popular report is that Beijing sent a diplomatic cable of “systematic edits” to a 150-page draft agreement.  It is believed China removed a good portion of the language that materially affected intellectual property (IP) theft, forced tech transfers and competition policies.  Basically, all the important stuff.  This was a non-starter for the US and they quickly countered with an increase in the tariff rate to 25% on $200 billion in goods, with the possibility for another $300 billion.  This led to China announcing retaliatory tariffs on $60 billion of US exports. The markets have obviously not been a big fan of any of this.

Today, it was announced that some of the tariffs may be postponed giving the negotiators more time to reach an agreement.   This has provided some short-term relief to the markets.

The quick turn of events has caught many investors by surprise.  For months, the same headline appeared in different forms claiming that “progress” was being made and that a deal was just around the corner.  After hearing the same mantra repeated over and over, investors began to accept it as fact.  A trade deal with China became a working assumption that allowed the market to grind higher, until doubts arose about a near-term deal.

Markets tend to rise when there is widespread belief that a backstop exists.  Whether it is central banks vowing to keep interest rates low or strong economic numbers, people are more willing to take risk when they feel conditions are favorable.  This often leads to excess risk taking and potentially bad outcomes.

As we evaluate how to interpret what this breakdown in negotiations means for HCM portfolios, we must ask if these threats are simply gamesmanship or if the two sides are digging in their heels for an extended time.  The former would most likely result in additional volatility but would eventually give way to cooler heads and ultimately result in a deal being struck.   The latter could change the market trajectory in a material way.  Going back to the chart above, both sides may be suffering from a case of overconfidence as market performance has been so strong for both countries so far this year.   The US and China may see the strength in their respective stock markets as a “scorecard” that emboldens their respective positions.  In a truly ironic twist, market volatility may be the best motivation to get the negotiators back to work at crafting an acceptable compromise.

For now, the change in tone between the two sides has caught investors off guard and created an environment where people are selling first and asking questions later.  As of now, HCM maintains the position that equities can continue to move higher this year with the possibility of one or more 5-10% corrections along the way.   If the current correction runs much deeper, we will add to equities by rebalancing to existing targets.  We will continue to monitor the rhetoric between the two sides and will reduce portfolio risk if we believe the circumstances around negotiations have changed materially and the long-term trend of the market comes under pressure.

“Beware of little expenses.  A small leak will sink a great ship.”

-The US raised tariffs on Chinese imports worth $200 billion as the two sides continued negotiations to resolve their trade dispute.

-US consumer price data was slightly weaker than expected, supporting the case for the Fed to remain on hold for the time being.

-The US administration is expected to make a decision on tariffs on auto imports by May 18th, though the deadline may be delayed.

-OPEC energy ministers will meet this week amid rising tensions in the Gulf.   The US has tightened its sanctions on Iran, and the US-Saudi Arabia relationship is under heightened pressure.