Before smartphones and tablets were invented, what some refer to as the “good old days,” summer activities involved a little more adventure.  One popular family activity was going to the local festival.  While these still exist, their popularity has waned over the past decade.  One of the top attractions was the Fun House.  The Fun House was usually a large building or trailer with a collection of separate rooms that each held a unique feature.  Some effects were more intense than others but one constant was the Hall of Mirrors.  The Hall was a room or actual hallway that contained a series of strangely shaped mirrors that would distort ones image in a variety of interesting ways.  There was always something interesting about seeing yourself appear 10 ft tall or looking like a giant “S”.

Now imagine the bond market is walking through the Hall of Mirrors.  The image in the mirror would look something like this: 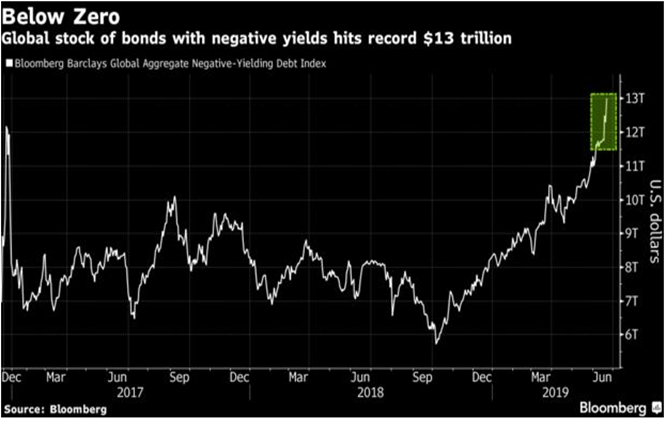 The chart above shows the amount of global debt that has carried a NEGATIVE interest rate going back to the end of 2016.  Some of you may be asking “How you get a negative interest rate on a bond?”  It’s a great question that we will touch on shortly.   For now, just think of a negative interest rate as an insurance policy.  You are essentially paying interest to a creditor to hold your money and deliver it back to you at a later date.  The amount of global debt with these characteristics has gone from a low point of around $6 trillion in Sept 2018 to around $13 trillion in about 9 months.

Let’s go back to the question, “Why would anyone buy a bond with a negative interest rate?!”   The longer and more theoretical answer is: you would only do this if you were worried that we were about to experience a financial Armageddon and that the safety of your principal was more important to you than making a return on it.  The shorter answer is simple…you wouldn’t.  Nothing would indicate we are anywhere close to a financial Armageddon that would cause such a dire financial condition.

Now that we have determined no rational investor would purchase such an investment, we still must explore why/how this is happening to such an extreme extent.  Enter global central banks.  These organizations remain committed to doing everything they can to keep slow economic growth around the world from turning into deflation.   They believe their interest rate manipulation will ultimately stimulate economic growth.  They continue to purchase bonds in order to drive rates down, even if it means those rates are negative.  When you are a sovereign government and have unlimited funds to invest (because you print money) and no concern for price, the chart above is the result.  It’s their own Hall of Mirrors.

We have received more questions about the chart above than any of the other charts we have used in these Insights, combined.  It highlights an extreme distortion in a market that is filled with distortions.   Most importantly, it touches on the bigger concept of strategy when constructing portfolios in this environment.   For the past several months, central bank policy has put fundamentals in the background when it comes to market moving events, save the occasional US/China tariff headline.   Even now as we approach earnings season and economic data fails to inspire, those concerns seem muted against the possibility of a rate cut later this month.  According to market analyst Charlie Bilello, the Fed has never cut rates with the Unemployment Rate below 4%, yet the market has priced in the chances of that happening in a few weeks at close to 100%.

The balancing act between monetary policy (interest rates) and market fundamentals (earnings and growth) has been a reality of this market for almost a decade.  Right now investors are focused on monetary policy and they are happy.  However, investors are fickle and can change their focus in an instant.  As we approach the end of summer, we will remain ready to act if investors change their focus to slow global growth, putting elevated markets at risk.

We also encourage clients to go to our website and check out our 3Q Market Update webinar, which outlines our current thinking regarding markets and portfolio positioning.

-Fed Chair Powell’s remarks before Congress and minutes from the FOMC’s June meeting set the stage for an imminent rate cut by the central bank, providing more evidence of a dovish shift in monetary policy

-US Treasury yields rose after the US Core Consumer Price Index came in higher than expected.  At .29% month-over-month, it was the largest gain since January 2018

-Several large banks kick of Q2 earnings season this week, with analysts expecting S&P 500 companies on average to report lower earnings versus the year-earlier quarter.  This would mark the first quarter of negative earnings growth since 2016 if results come in as expected.