There is a popular finance book by Nassim Taleb titled The Black Swan that will most likely shoot to the top of Amazon’s best seller list over the next few weeks.  The book focuses on the extreme impact of rare and unpredictable outlier events and the effect they can have on all aspects of life, markets included.  The cascade of events that have unfolded over the past few weeks have been historic in a way that most would like to forget but all will most certainly remember.  What started as a viral outbreak in China has metastasized into an unrelenting avalanche of shocking headlines and unprecedented actions, both in the markets and society.  The market's response to this uncertainty has been as swift and disorderly as any time in history. 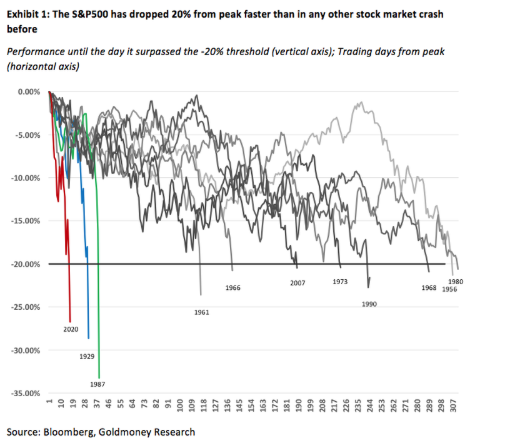 The chart above shows the progression of bear markets going back to 1929.  The numbers on the bottom denote the amount of time it took (in days) for each respective market to go from its all-time high to a bear market decline of -20%.  The common theme of the black and grey lines is that every peak to trough decline took greater than 100 days, with more than half over 200 days.  The green line represents the October 1987 “Black Monday” decline that was dominated by the single worst day in the history of the market as the indexes were down around -22%, yet it still took around 40 days.  The blue line represents 1929 and the Great Depression.  The red line represents 2020, which went from peak to bear in an astonishing 18 days.

The question that everyone is trying to answer is simple: Are we closer to the end or the beginning of this sell-off?  What the market was concerned about at the beginning of this sell-off isn’t necessarily the same thing it is concerned about at this moment.  The coronavirus will remain a dark cloud overhanging everything as it has forced us to think about our daily lives in a way that most people could never envision.  As we think about how to best manage portfolio risk as we move forward, there are several reasons the current situation could get worse before it gets better.

First and foremost, investors were hopeful that central banks would come in and “save the day”, similar to what we experienced at the very depths of the 2009 crisis and several times since.  After initially cutting rates by .50% last week, the Fed made the decision to cut rates an additional 1% while also launching a $750 billion dollar stimulus program, along with several other programs to ease the financial stress in the credit markets.  These measures, while most likely necessary, did little to sooth investor fears.  This was a large psychological safety net that was removed from the marketplace very quickly.  It doesn’t mean the Fed won’t attempt to do more, but with interest rates at zero, there isn’t much left in their toolbox.

What initially started as a stock market problem has now moved into the credit markets.  The last time we saw credit market stress at these levels was in 2008.  Funding markets are vital to ensure that liquidity is available in the areas of the market that need it the most.  Without a properly functioning credit market, leverage in the system that is normally “safe” comes under risk and introduces the possibility of fire sale liquidations of any and all assets in order to raise cash.  Until credit markets stabilize, the risk of further downside remains.

Lastly, we are starting to see analysts project earnings under the umbrella of a nationwide shutdown.  While we haven’t reached that point yet, the progression of the virus in Europe has put the United States under pressure in the global spotlight to potentially put extreme measures in place to slow the spread of COVID-19 to mitigate the stress on our healthcare system.  Unfortunately, it seems the solution with the highest chance of success are shutdowns in larger metropolitan areas.  This brings the risk of other restrictions on activities such as travel into the possible realm. Even the most optimistic assumptions would still see earnings growth reduced to levels that could reduce the fair value for most companies to levels lower than we are seeing today.

For these reasons and the tendency for markets to overshoot on both the up and downside, respecting the significant amount of uncertainty that continues to surround the outbreak on both a social and economic level, we have made the decision to reduce risk further and raise cash in the event we experience a temporary closure of trading.  This would help assure that clients would have access to cash if needed.  Our expectation is that the number of cases will rise significantly as more testing is done.  Even after the large market decline so far, the deterioration in the credit market combined with the possibility of more extreme measures to combat the spread of COVID-19 leads us to believe that additional risk control is appropriate for our Advance and Defend™ portfolios.  Once the depth and scope of this problem are better understood, we will likely look for an opportunity to aggressively re-risk tactical portfolios.

We continue to purchase equities through a disciplined rebalancing program in HCM Strategic portfolios as market volatility triggers allocation changes.