If there is anything that financial media is certainly guilty of, it’s producing too many articles that portend “big things” are just about to happen.   It’s usually conveyed right in the title with a sense of either impending doom or riches.  Of course, the goal of most articles, whether financial or not, is to get as many people as possible to click on the article.   Creating a shocking or intriguing title is certainly a good way to do that.  Most of the extreme investment pieces don’t stop at just the title. They meticulously lay out how and why something crazy is going to happen and many will even take a stab at predicting “when” as well.  It usually isn’t enough to just lay out the possibility of an inflection point in the market.  To really sell it, the author must include the details, because why would someone just imply there will be a market crash when they can predict the market will crash by (insert extreme, arbitrary number and date).

So now that we have thrown stones at financial industry pundits and how they present situations as “the point of no return”, we will do our best to follow their lead while trying to avoid the doomsday pitfalls described above. 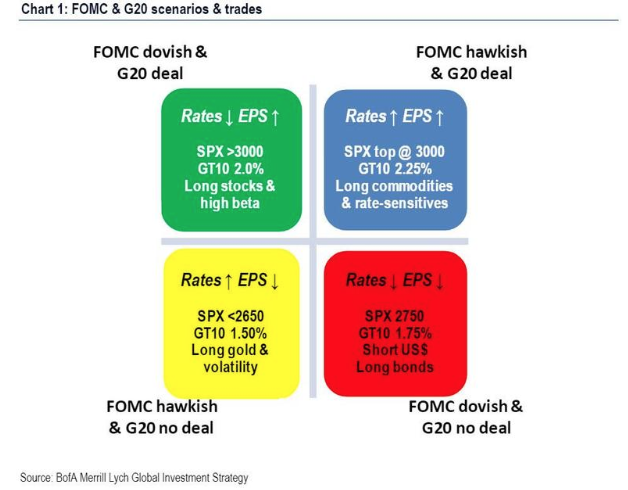 The chart above lists possible market outcomes based on a combination of key events: the rate decision from the FOMC today, June 19th, and the result of trade negotiations with China at the upcoming G20 meeting.  While the chart reflects only one bank’s opinion on the possibilities, it is very comprehensive in playing out the various scenarios.  A “dovish” Fed would indicate that rates are being cut or there is strong language in their press release indicating that rates will be cut in the near future, while a “hawkish” Fed would be anything that indicates the opposite.

So far, we haven’t made any predictions about what will happen after the Fed’s rate decision.   And while I don’t want to spoil the ending, since we are not big on predictions, especially when they involve the future (credit Niels Bohr), we probably won’t give you any.  However, it goes without question that today’s Fed decision is likely a very big deal for a variety of reasons.

First, the last two big, global bear markets were both accompanied by a singular, seemingly infallible belief in a larger “theme”.  In 2000, it wasn’t necessarily the belief that the internet was going to change the world, it did.  Rather it was the belief that the “internet revolution” justified paying outrageous prices for companies that were priced absurdly high.  It didn’t.  In 2007, it was the belief that real estate prices would never go down.  They did.  So what might be the next “theme”?

For the past decade, the Fed has provided the market with assurance they will be supportive of asset prices.  Early in the recovery, this was their directly stated goal.  But at a certain point, they didn’t want to be seen as being held hostage by the market.  Their short lived rate hike cycle was their best attempt at convincing investors that Fed support was gone and wouldn’t return short of extreme volatility.  But all it took was for equity prices to fall back modestly to levels last seen in the middle of 2017 and the rate hikes ended.  More importantly, the new investment “theme” was re-enforced…bear markets can’t happen because the Fed won’t allow them.

As economic growth numbers continue to show lackluster results, the market has priced in 2-3 rate cuts by the Fed in 2019. This stands in stark contrast to the 3-4 hikes that had been expected in 2019 as recently as 7 months ago.  Put simply, the market is demanding the Fed cut rates.  With the market about 1% off all time highs and unemployment at extremely low levels, the justification for a rate cut now seems somewhat weak.  If the Fed ever wanted to break the markets dependency on low rates, Wednesday would be a good time to start.

But what if they do decide to defy the market and leave rates alone?  Will investors panic or will they say, “no problem, because we know they will do it eventually.”  And if they do cut, will it be enough?  According to Ned Davis Research, the effect of a rate cut on equity prices greatly depends on where they happen in the economic cycle.  A cut before a recession begins doesn’t have the same power as a cut late in a recession.

Ultimately, the decision on June 19th has the potential to create a wide array of possible outcomes.  Most importantly, it will mark another moment where the next, prevalent investment “theme” will either be strengthened by the Fed bowing to the market’s demands or weakened if the message isn’t what was expected.  If it is weakened, watch out! (Oops, was that a prediction?)  All we know is that someone is about to blink.

“Knowledge in being aware of what you can do.  Wisdom is knowing when not to do it.”