On Tuesday morning, April 14th, JP Morgan reported their first quarter earnings.   This would be the first high profile company to report results in the new COVID-19 world.  While only a small portion of the numbers were produced during the official “lockdown” period in the US, it would give us some insight into how companies see the virus affecting their business going forward.   The company reported earnings of $0.78 vs. a consensus estimate of $2.20, a fairly large miss.  They also reported a $6.8 billion increase in their loan loss reserve to protect against possible defaults.  For comparison, their entire loss reserve was $1.5 billion a year ago.  Such an increase would imply that they are preparing for a very tough environment going forward.  Their CEO, Jamie Dimon, confirmed that positioning by noting in his prepared comments how the company was preparing for the “likelihood of a severe recession.”   Considering everything that has been going on over the past 2 months, these comments weren’t shocking.  Hours later, the International Monetary Fund reported their expectation that the global economy would contract by 3% in 2020, matching the worst financial crisis since the Great Depression.  And not to be left out, Goldman Sachs threw their hat into the ring by projecting “an economic downturn worse than the financial crisis of 2008.”  This trio of dire economic forecasts was enough for stocks to open the day up around 2.5%.  Confused yet? 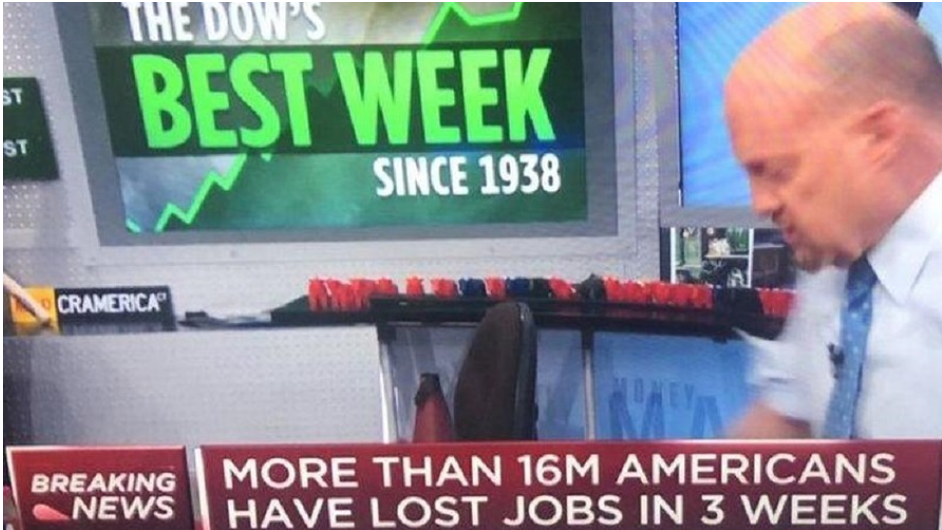 Normally, we wouldn’t include a screen shot from a show on CNBC in these reports, but these aren’t normal times.  This came from a show on CNBC called “Mad Money”.  The two main infographics on the screen do a pretty good job illustrating the massive divergence we are currently seeing between financial markets and the economy.  The top shot touts the Dow’s Best Week since 1938 (over the past 82 years).   Meanwhile, the bottom of the screen has a breaking news headline that highlights that over the past 3 weeks, the United States has lost 16 million jobs…..or roughly 75% of the jobs created since the lows of the Great Financial Crisis.

As the weekly initial jobless claims were being released last Thursday morning, another headline hit the tape that some may look back on years from now as the moment that markets changed forever, and I don’t think that is being dramatic.  The Fed announced an expansion in their “stimulus” program adding an additional $2.2 trillion in funding ability.  More shockingly, the Fed announced authorization to purchase ETFs containing “junk bonds”.  Junk bonds consist of companies that are higher risk and therefore require a higher cost of financing, hence the term “high yield bonds”.  Since there is more risk in investing in these companies, investors need to exercise an extra layer of prudence to ensure the return they are expecting is worth the risk they are taking.  Up until this point, the Fed had kept their purchases to mainly government and municipal bonds, mortgage-backed securities and some investment grade corporates.  For many, this was the point of no return. The point where the Fed was essentially bailing out not distressed companies or ensuring proper functioning of money markets…they were telling investors that being prudent was no longer required.  It also got people thinking…if they can buy junk bonds now, why can’t they buy stocks too?

The Fed’s endeavors to support markets have been well documented and, up to this point, seemingly successful.  But the challenge now is to decide if we have truly reached the point in financial markets where we can ignore all the bad things and simply rely on the Fed.  While still down from its highs, the S&P 500 has now rallied back to levels seen in August 2019 or approx. 6 months ago.  One would have an extremely difficult time arguing that the challenges facing us now were even remotely close to what they were six months ago, yet the market is currently making that argument.  Not only that, but the market is doing this in the face of a global economy heading into  a 10-15% contraction this quarter, 16 million jobs lost in less than a month and no clear time table for when the economy will “re-open”.  It certainly begs the question: if the Fed can just print money and support the market with no consequences, then why wouldn’t they do this indefinitely?  Considering how the economic numbers are trending, they might just get their chance.

We are getting closer to a fork in the road as we consider how these facts relate to HCM’s investment strategy.  One path contains all the things we have been worried about for the past month and a half.   An impending recession with unknown severity and duration, corporate earnings that are expected to significantly contract and historic job losses.  Down the other path is unlimited funding and the commitment by the Federal Reserve to support markets regardless of how disconnected stock prices get from the actual economy.  If the market has simply turned into a function of the Fed’s balance sheet and that path is the only one left, we need to be prepared to walk down it.  HCM remains convinced that the economy still matters, that weighing risk vs return matters and that ultimately, we owe it to our clients to consider these things when making investment decisions.  Right now, the Fed is doing their best to change our minds.

"Happiness is not something ready-made.
It comes from your own actions"