This week certainly has the potential to be one of the more pivotal ones we have seen in quite some time. Optimism is continuing to grow around the potential to re-open the economy, with many states, including Ohio, laying out a definitive plan to allow businesses to begin a return to normal.  Even though they will be operating under significant restrictions, the psychological boost has been enough for investors to start to imagine the “best case scenario” morphing into reality.  Whether or not the return to work plays out that way is yet to be seen.

In addition, this is the busiest week of the earnings season for companies in the S&P 500, with the five stocks that represent over 20% of the index (Apple, Amazon, Facebook, Microsoft, and Google) all reporting.  So far, results have not been inspiring.  With 24% of the index reporting as of April 24th, the current earnings growth rate is -15.8%.  That would represent the worst quarter for earnings since Q2 2009.  Even more concerning is that current estimates for Q2 and Q3 are  -31.9% and -16.9% respectively.  Historically, earnings projections at these levels would be cause for significant concern, but this market continues to disassociate itself with any semblance of economic data.  The emotional grip of FOMO (fear of missing out) is growing stronger with each passing day as investors’ confidence in the Central Banks winning the battle…and the war increases. 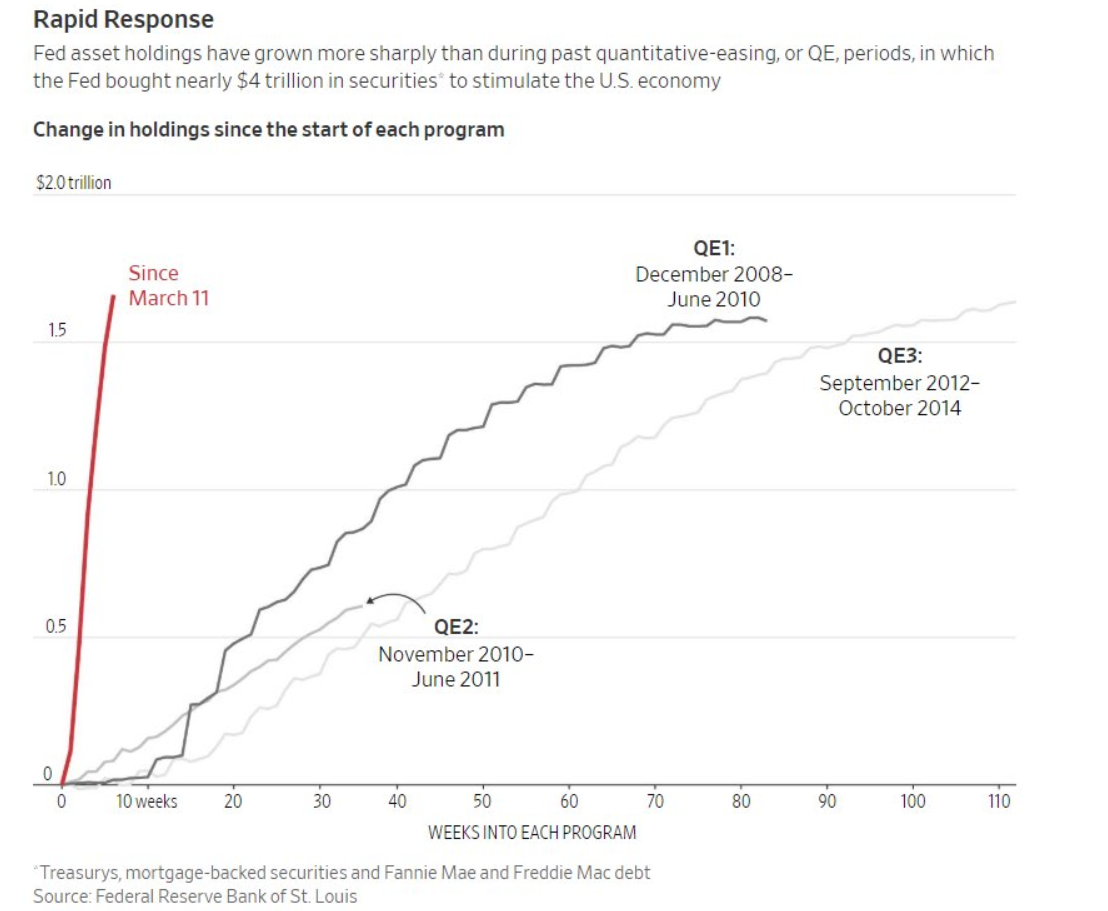 The chart above shows the progression of asset purchases by the Fed over each of their 4 quantitative easing programs, represented in weeks.   The startling takeaway here is that the Fed has purchased more assets in the past 7 weeks than during QE 1, which took almost 85 weeks and three times the assets as during QE 2, which took 35 weeks.

Markets can stir emotions in strange ways.  It is amazing to see how opinions have changed over the past 60 days.   Many of the same people who thought the world was going to end and the market was going to go down in a straight line are suddenly talking themselves into all time highs by the end of the year.   We have reached the point in the recovery where things that seemed crazy are now being rationalized.  In 2000, it was the accepted wisdom that earnings don’t really matter.  Eventually they did.  In 2007, it was the belief that real estate prices would never go down.  Eventually they did.  Now we stand at the doorway of the “new normal,”  the one where we have an angel on one shoulder and a demon on the other.

The angel balances the risk of loss against potential returns to be sure the trade-offs are fair. The angel is logical and considers historical valuation metrics and patterns that have governed markets since the Dutch Tulip Craze.  The angel is looking out over the economic landscape and sees demand destruction at an unprecedented level.  The angel sees significant earnings contraction, 26 million people without jobs and a market trading at valuations that are as expensive as they were at the all time highs reached in February 2020.  The angel doesn’t believe the world is ending, but also doesn’t expect things to snap back to normal overnight.  With so much uncertainty, the angel suggests that you keep some extra reserves in place until there is more clarity around the situation.

The demon lacks both patience and caution.  He continues to whisper in your ear that  the market wouldn’t be going up if things were really that bad.  He tells you to ignore the economic reports because, once the virus goes away, everything will immediately be even better than it was before.  He reminds you that the Fed will do anything to support the markets, regardless of what the consequences might be.  He reminds you, angels are not that much fun anyway!

Normally, the arguments from the devil and angel play out over the course of months, but remember that this cycle has played out over just about seventy days.  This compressed time frame has increased the urge of many investors to do something, anything, so opportunities don’t pass us by.  HCM regularly assesses the risks we see in the market, and we can’t yet say those concerns have been alleviated.  At the same time, we aren’t ignoring the positive market movements that have occurred over the past few weeks.  While we believe these have been the result of aggressive monetary policy, they have led to an improving technical backdrop.  We are starting to see a broader range of participation to the upside on both a sector and market cap basis.  If these   internal market signals continue to improve in the face of deteriorating economic data, we will give consideration to slowly increasing equity risk in Advance and Defend™ portfolios.  Remember, Strategic portfolios have been fully invested through the duration of the Covid-19 crisis.  As of now, we haven’t reached that decision point, but our investment committee continues to explore all options on a daily basis.

“Truth is confirmed by inspection and delay; falsehood by haste and uncertainty.”