In “normal” years, the calendar rolling from July to August would be a non-event. This year, however, July 31st marks a significant milestone because, for the past 4 months, the government has been providing the unemployed with an additional $600 per week as part of the original COVID-19 stimulus package.  This additional benefit has allowed many to successfully navigate the financial hardships brought on by the measures implemented to fight the spread of the coronavirus.  On Friday, that benefit is set to expire.

Many believe that the announcement of additional stimulus over the next week or so is already a foregone conclusion.   Details are starting to leak out about what each side is proposing, and the political Kabuki theater that will surely be full of all the political drama, name calling and hyperbole that has become a mainstay of American politics.  Nonetheless, what each side can agree on is that the only way to help solve these problems is with A GREAT DEAL of money.  Early consensus is that the next relief bill will be between $1and 3 Trillion dollars.  Add that to an already historic amount of stimulus from the earlier bills, combined with massive money supply increases by the Fed and you start to notice a trend. 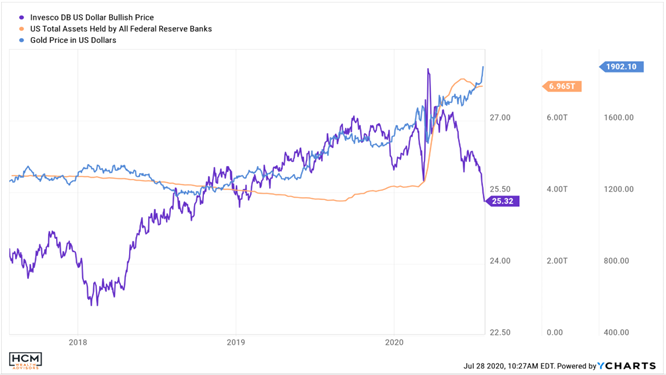 The chart above illustrates how one of these trends is starting to garner some significant attention.   The purple line represents the value of the US dollar, the orange line is the Fed’s balance sheet and blue line is the price, in dollars, of 1 oz of gold.  What you will notice is a fairly clear inflection point right around late March when the Fed announced the first round of fiscal stimulus and a willingness to do whatever it would take to shore up the economy.

With the expectation that an additional stimulus bill will pass soon and be at least $1 trillion in size, the total amount of “money” injected into our financial system over the past 4 months will be close to $10 trillion dollars.  For some reference, that is roughly half of total US GDP.  Econ 101 tells us that when you increase the absolute supply of anything at that rate the price is almost always going to move lower, which is exactly what we are starting to see with the US dollar.  So how does that relate to gold?  Remember that gold is priced in US dollars, so as the value of the dollar moves lower, the price of gold moves higher as it now requires more dollars to purchase the same amount of gold.  This same relationship holds true for all commodities that are priced in dollars.   The main difference is that gold doesn’t offer the same utility function that other commodities do.  As someone once said, “Gold is a hedge against political stupidity.”  In this case, the belief that constant stimulus will continue to erode the value of the dollar and ultimately lead to the price of gold going higher and higher.

Another way to describe a decrease in the value of the dollar is inflation, which is a term that almost everyone is familiar with.   High levels of inflation cause concern because they can erode purchasing power over time, making items “more expensive” than they were before.  So is the rise in the price of gold signaling that inflation is right around the corner?   Not necessarily.  The inflation rate measured by the Consumer Price Index remains stubbornly low.  In addition, inflationary concerns would normally be accompanied by increasing Treasury Bond rates yet the 10 year T bond has been stuck in a historically low trading range since March.  Lastly, it currently takes $1 of debt to generate approximately .38 cents of GDP.   In 1952, $1 of debt generated .82 cents of GDP.  When you have that much unproductive debt in the system, it acts as an anchor to real economic growth.

So with stimulus at unprecedented levels and the value of the US dollar moving lower, is gold an asset class to consider?  As gold has moved higher, you have naturally seen some calls for significant price increases.  With that also comes a little bit of speculation that can help drive the price higher in a sort of feedback loop.  However, to get gold to the extreme levels (I have seen price targets as high as $5000/oz) would require either a massive jump in inflation, a massive devaluation of the US dollar or pure speculation.  The US dollar still remains the global reserve currency, meaning that the demand for dollars will likely remain high for the foreseeable future.   With constant demand for dollars it is difficult to imagine a true “crash” for dollar values, especially when one considers most of the world is engaging in similar levels of stimulus.

HCM’s investment committee has been studying scenarios where inflation levels are significantly higher and what those outcomes would look like. While gold has had a nice run and may make sense as a diversified inflation hedge at some point in the near future, we believe its lack of utility and income still make large positions unsuitable for most investors.

“Don’t gain the world and lose your soul; wisdom is better than silver and gold”