The Federal Reserve is set to meet next week and is widely expected to cut short-term interest rates.  While opinions vary on how much they will cut, most analysts expect .25%, with the outliers being as high as .50% or as low as 0%.  These meetings will likely affect markets for the foreseeable future.

The drumbeat warning of a potential recession has also grown louder following the yield curve inversion several weeks ago.  It is difficult to ignore recession predictions considering that every recession since 1950 has been preceded by a yield curve inversion (however, not every inversion has been followed by a recession).  While the evidence of a yield curve inversion preceding an economic recession and a related bear market is strong, like most things in the investing world, the timing of these recessions is unpredictable and can take years to play out.  Because of the unpredictable timing, HCM has not yet taken its equity exposure below neutral levels; however, we have reduced our volatility through a recent equity reallocation.  Offsetting economic risks is strong historical evidence that following a second rate cut (which is likely next week) on average, stocks enjoy significant gains over the following months. 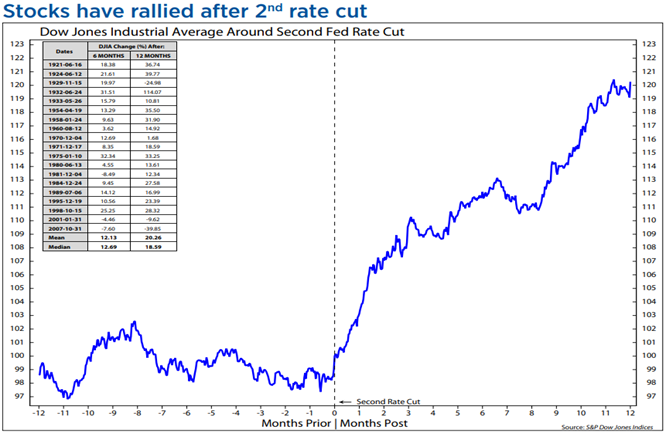 While the data above is certainly encouraging for equity investors, the devil remains in the details.  Even though most of the numbers for the time periods listed in the chart are positive, there are negative periods.  These negative periods coincide with recessions and show an important distinction for those who want to sound the “all-clear” just because the Fed continues to cut rates.  Recessions are the black hole from which nothing escapes, especially negative equity returns.

Just how big is the performance gap between recessionary and non-recessionary periods following a second rate cut?  Further data from Ned Davis Research shows the average gain for the 12 months after the cut is 18.2% if the economy avoids a recession but drops to -10.8% if a recession hits.

With such a wide dispersion of possible outcomes, we can clearly see that historically the Fed has only so much ammunition to fight off recessions.  We work through our portfolio designs based on the assumption that an economic recession would be the worst case scenario for HCM Clients.  Fortunately, we don’t currently see hard data in the numbers that would indicate a recession is at our doorstep.  One of the more reliable recession indicators, the Chicago Fed National Activity Index or CFNAI, remains above its recession reading despite indicating growth has slowed over the past several months.  The CFNAI is a weighted average of 85 indicators of growth in national activity and has a successful track record identifying recessionary periods.

Despite not seeing hard evidence, we still need to be aware that risks remain in the market.  The ongoing tariff issues between the US and China, collapsing interest rates around the globe and slowing growth projections all present headwinds to the market moving higher.  Without these issues being resolved, HCM remains at neutral stock/bond weightings, with a slight bias towards high-quality, US assets.  If we see a surprise from the Fed next week or a sudden spike in growth or inflation, the markets would likely see a resurgence in sectors such as value, small cap and emerging markets.  We would also see a reversal in bond prices if growth were to surprise to the upside, as inflation would once again become a topic of discussion.  Bonds have performed extremely well this year as inflation has been a no-show.

“I don’t want to get to the end of my life and find that I have lived just the length of it.  I want to live the width of it as well.”

-August ISM Manufacturing in the US dropped to 49.1, its first sub-50 level since August 2016, while August jobs growth came in below expectations.  The ISM non-manufacturing survey came in above expectations at 56.4.

-The Federal Reserve will meet on Sept 17-18 and is expected to cut interest rates by .25%.  Investors will pay close attention to the message delivered by Chair Powell around the possibility of further easing in the future.