While we are hopefully starting down the path of recovery from one of the worst economic shocks in our nation’s history, we must continue to be cognizant of the growing divergence between the capital markets and the economy.

Last week, the non-farm payroll report came in with a staggering loss of 20.5 million people, representing an unemployment rate of roughly 14.7%.  For some perspective, the highest level during the Great Financial Crisis was a little over 10%. In addition, earnings for S&P 500 companies continue to move lower, with the current expectation for 2020 earnings to be a decline of 19.7%.   Despite that economic reality, the stock market continues to hold onto the belief that this is all simply a bad dream, and when we wake up, everything will be back to normal. 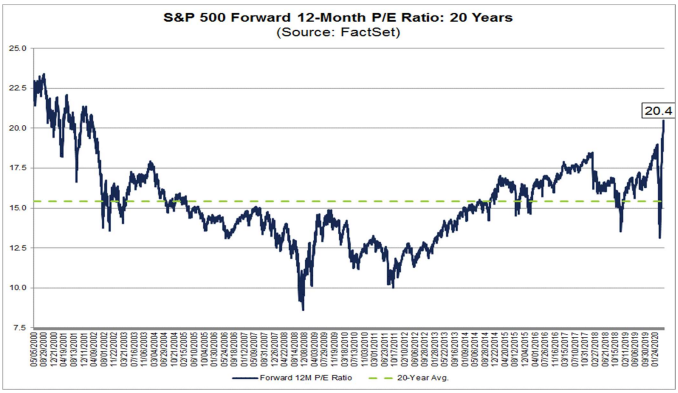 The chart above shows the 12 month forward P/E ratio for the S&P 500 going back to 2000.  A forward P/E ratio is a way to describe how expensive the market is by understanding what investors are willing to pay for $1 of earnings over the next 12 months.  Historically, higher P/E ratios predict lower potential returns and vice versa.  When P/E ratios are above average levels, the market can be described as expensive.  Currently, the forward P/E is 20.4 and the highest level since 2002.   So the market is willing to pay more for future earnings than at any time over the past 18 years.  HCM sees potential risk in these valuations.

The question that remains front and center seems clear: Why are stocks continuing to move higher when the economcy is in such bad shape?  As a follow up: Can this continue?  Let’s focus on the second question first.  While this situation may seem irrational, there is no rule that mandates that markets must do anything at any particular time.  As economist John Maynard Keyens said:

We have discussed the life cycle of bear markets before.  The typical pattern they follow is a swift, initial sell-off followed by a counter rally where investors are led to believe that everything is back to normal.  The final act of the play is a longer, slower selloff that takes markets back down toward the initial lows as economic reality sets in.  Again, there is no rule that says it MUST play out this way.  However, until market internals improve further, protecting capital is our top priority.

So what is causing the market’s recent higher move?  The theories reside in two main camps.  The first is a combination of optimism and denial.  The optimism centers around a re-opening of the economy and the belief that all the jobs lost will come back quickly and seamlessly due to an abundance of pent up demand.  While it is still too early to tell exactly what the rebound will look like, results so far have been mixed.  In the states that have opened recently (Texas, Florida, and Georgia), restaurant traffic according to OpenTable is still only at 10% of the numbers seen 1 year ago.   In addition, airline passenger data mirrors those results with daily passenger counts around 200,000 compared to 2.4 million last May.  These numbers will improve as more states open, but it is hard to envision things going “back to normal” any time soon.

The denial portion has to do with economic data.   More specifically, the fact that some investors have taken the stance that the current economic reality simply doesn’t matter. It’s similar to someone with a fear of heights.  While standing on the edge of a roof will cause panic, flying in an airplane doesn’t register because the height is so extreme, our brains process it in a different, less panic-inducing way.  But that isn’t the only reason fundamental data is being ignored.

The Fed has continued to make it clear that they will do whatever it takes to, in their words, support the economy.  Though many have wondered how buying almost $2.5 trillion dollars in assets has done anything to ensure people keep their jobs or help them pay their mortgage.  Nonetheless, their implicit backstop of the market has convinced many that printing money can solve almost any problem, including a global pandemic that has caused historic economic destruction.  The market, in the short term, is driven heavily by sentiment, but things could change quickly if the Fed’s knees start to buckle under the sheer weight of pushing back against a tsunami.

So where does all this leave us?  HCM continues to feel that the probability of a quick V-shaped recovery remains low. With that said, certain market internals have continued to improve and are approaching levels that would allow us to consider adding some equity risk back to portfolios.  However, with markets at very lofty valuations and the current economic environment in  question, any re-risking of portfolios would look very different from what we would do at the bottom of a prolonged economic cycle.  Riskier assets (small cap equities, emerging markets, high yield debt) which would normally be trading at extremely attractive valuations are currently still overvalued by most measures.  Therefore, we would utilize a more measured approach, with tight sell targets in the event the rally loses steam.  We aren’t there yet, but we are making preparations, just in case.